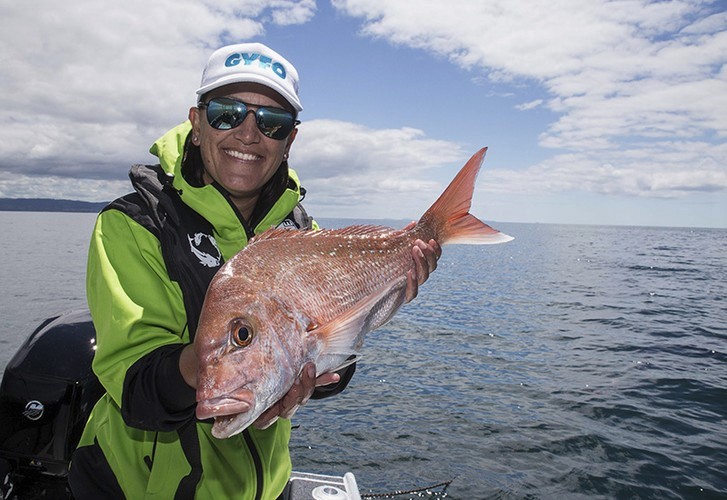 "Big bait, big fish mate - that's how you catch em", says the weathered bloke in the battered hat pulling his loaded dingy from the tide.

Under many circumstances he's right, yet there are plenty of days when the only way to catch anything at all is by going small. Whether it's matching a tiny food source - like anchovies - overcoming the bite-suppressing effects of a full moon, or coercing a nibble from bait shy snapper,  a number of factors are best combated with a minimalist approach. After all, you can't catch a fish which doesn't bite.

With bait, unlike steak, bigger is not always better. When times are tough try smaller bite-sized morsels. Beat the bait peckers by offering small morsels, more likely to be taken in a single swallow, optimizing the chance of a solid hook set.

I also think there is something to be said for freshly cut baits, and the all attractive smells and oils that leak out of them. It's a bit like a tiny drop of berley on every offering.

I know this is controversial advice but I am a firm believer in dropping a hook size or two on the tough days. This is assuming you aren't already using a relatively small hook (say, a 5/0 or less) and that you aren't fishing in the snapper playpen and will consequently kill a bucket load of undersized fish.

I put this theory into practice this weekend past, while fishing a local competition. Observing a guest on our workboat struggle to hook any fish after a couple of hours of fairly steady bait fishing I noticed she was using a 7/0 flasher rig, where everyone else was using 6/0s.

Simply reducing her rig by one hook size completely changed her day. She caught her personal best snapper and a monster kahawai, which no doubt would have won that section of the competition if we'd managed to get to the weighstation on time. Damn!

This not-so-quiet revolution is changing the way kiwis fish; many no longer bothering with bait at all. As a rule, the depth of the water and the wind conditions govern the lure size of choice, particularly when targeting bottom dwellers like snapper.

As I have discovered, big improvements in micro-jigging technology are allowing lighter jigs to be fished in increasing depths. This is especially useful when the fish are hot on the bite for anchovies and can subsequently be fickle on anything else.

A few nice sessions testing Shimano's new Colt Sniper range proved to me just how versatile these small jigs could be. A 55-gram jig produced solid fish in 50-metres of water, while on the drift. A much lighter 28-gram version took nice pannies when cast and pop-and-drop retrieved in a similar depth of water while on anchor. These light jigs are ideal in much shallower water, although I am yet to test this premise personally. Alternatives to micro-jigs include smaller Kaburas for deeper water and softbait options like the new Gulp Nemesis.

Simply put, if you haven't tried fluorocarbon leader yet, the time is now. The product's biggest advantage is its abrasive resistance, which allows an angler to utilize leader much thinner than normal. My go-to fluorocarbon leader weight for most applications is 20-lb - down from 60-lb monofilament. I will fish even lighter, as low as 15-lb, in very clear water.

Conversely, when fishing bait I still prefer to use monofilament over fluorocarbon. For straylining purposes I like Black Magic's 60-lb supple trace rigged with circle hooks, which ensure corner of the jaw hook-ups, thus keeping the fish's teeth away from the leader. For ledger rigs I also like 60-lb trace but in a stiffer variety so the rig keeps its shape.

Going light with mainline to catch bigger fish seems counterintuitive. And for the most part it is. Remember, we are talking about getting action on the tough days here. Those days when getting a bite, any bite, could be the difference between dinner from the boat and a trip to the supermarket.

While the go-light-for-bites rule does have some place with traditional monofilament lines, it comes with a caveat. With very light lines (3-kg and less) the odds become stacked in the fish's favour and it is probably not worth the effort, unless you are a serious world record chaser. For most of us, the ability to feel a bite and the power to do anything about it, are both seriously inhibited. Personally, I find 8-kg line a nice user-friendly monofilament weight for straylining, although I usually have a TLD 15 loaded with a low diameter 15-kg line for the days the 20-pounders are on the chew.

Going light with braid offers a few stealth advantages without compromising sensitivity. Of course, it will still break so use the drag lever with caution. Thinner braided lines offer huge advantages when it comes to getting lighter lures to the bottom in deep water, as I found recently fishing while the 28-gr micro-jigs in 50-m of water.

As long as you buy quality, smaller boats offer many advantages and surprising versatility when compared to larger models.

As they are less constrained by draft and weight, small boats open up a much wider range of launching options than larger vessels. Once on the water small boats are ideal for trying a bit of everything – diving, flounder fishing, exploring coastal nooks and crannies for moochers as well as blasting out wider on the calm days.

It seems obvious that smaller vehicles can tow smaller boats, considerably reducing the total investment required to get you to the water, on the water and back home again. An excellent case in point is the Suzuki Grand Vitara / FC 500 Centre Console combo I recently took fishing with Mandy Kupenga from Maori TV’s Get Your Fish On show.

The moral of the story

The key to the success of this strategy is to know when it's the right time to downsize. I cannot deny that it comes with risks; yes, that trophy fish might beat you to the rocks on lighter line.

It is all about defining what success looks like on any given day. If you are prepared to go fishless for a whole day in pursuit of a giant then fair enough, and good luck to you. But if the fish don't seem to want to play ball and you must take home dinner - try going smaller, lighter and leaner.