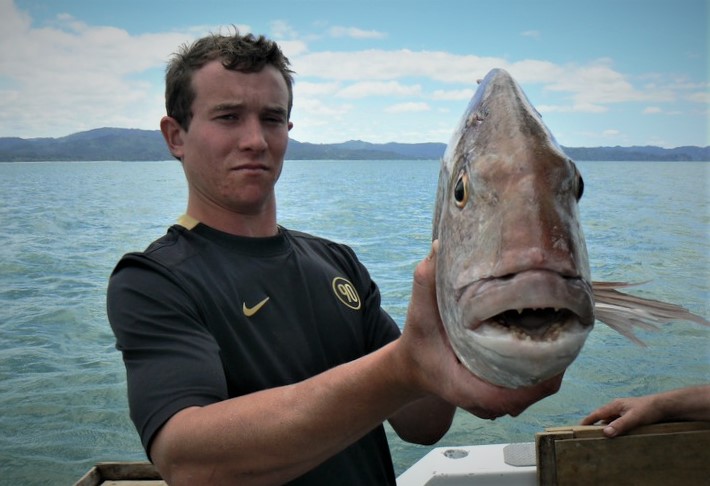 The West Coast of the Auckland region can be an intimidating place to fish but with the right knowledge, preparation and a bit of luck, it can also deliver explosive results.

The West Coast conjures up all sorts of nasty mental images for many recreational fishermen. Auckland’s West Coast, let’s say from Raglan in the south to the Kaipara in the north with the Manukau Harbour and Waikato River, almost, but not quite, somewhere near the middle will be the focus.

The place has a fearsome reputation and even some experienced Waikato, Auckland and Hibiscus Coast fishermen never even consider the option of fishing on ‘the other side’.

Why should they when they have such easy access to the fabulous Hauraki Gulf, which surrounds our biggest city?

There’s no doubting the opportunities the Gulf has to offer. It’s a mecca for softbait fishermen and the area between Kawau, Tiritiri Matangi Island and Little Barrier Island has what simply must be the most exciting snapper fishing in the world. Or is it?

The Hauraki Gulf can produce a myriad of other species from crayfish to hapuka, snapper to kingfish, terakihi to flounder.

Can the West Coast deliver the same?

The West Coast is a vast area with no shelter. There are days when a bar is dead flat calm and the route you take across it can be forgiving but it could be a different story altogether when you return on a big outgoing tide. You need to know your stuff then. Join the Coastguard!

As a general rule a 5.5m boat with 90hp on the back is the minimum you need for a safe bar crossing. In perfect conditions, or especially for beach launching, you can get by with less. This writer owns a 5.5m Sea Boss with a 90 E-Tec pushing it along and is yet to have a very scary moment in the 30 or so harbour bar crossings I’ve done in the last three years.

You’re probably asking yourself if going out over the coast is worth the trouble. Here’s a few points that just may change your mind.

There’s no better snapper fishing anywhere in New Zealand than around the West Coast over spring.

In the pre-spawning run from early October through to early December last year, limit catches were common within two hours, with a typical fish being anything from 2kg up to 6kg. There were plenty of bigger fish too and, of course, some smaller snapper coming onboard but the majority were all good solid fish.

By January, marlin and tuna were starting to turn up and late February was probably the most intense marlin action seen in the whole country for a very long time.

Boats were reporting multiple hookups and excited crews were talking of seeing marlin feeding frenzies with a fish count of 30 fish not that unusual on some days.

Balls of baitfish taking whatever shelter they could get from diving gannets would hide beneath boats only to have five or six marlin join in the frenzy smashing into the bait right up in the prop wash. It was exciting stuff indeed.

Some were calling it a once in a lifetime experience. Two years ago it wasn’t so different so that makes it a twice in a lifetime thing but then there was the time … well you get my drift, it can turn on some exhilarating fishing.

Most recreational anglers probably consider game fishing too expensive and too boring to be worth pursuing but when it comes to the West Coast, marlin are a very real option, accessible to anyone with a few mates who can beg, borrow or maybe even own some basic gear.

I know of two open tinnies with 30hp or less that managed to catch marlin this season, one of which featured in the last issue of NZ Fishing World. Most of us fish for snapper. They are great sport, great eating and always a thrill to catch.

West Coast techniques tend to differ from the east side and there are many theories on the reasons for that. As a general rule snapper are out deep in 60m of water in the colder weather and don’t start moving in closer until the water temp starts to increase in early summer.

On dead flat days you can fish as close as 8m or less, just be aware that any swells coming in will start to push up as they get into shallower water. You really don’t want to get too close to breaking waves. You also don’t want to stop on the shoals around the harbour or river entrances.

Out west the dropper rig rules and it is hard to beat a couple of 7/0 recurve hooks on a 60lb trace and an 8-ounce bomb type sinker. Simply put a decent chunk of mullet or kahawai once through the hook and drop straight down.

Heavy gear is the tackle of choice to keep the sharks and kahawai under some sort of control. By all means try lighter gear but be prepared for the frustrations that mega-sized kahawai and large tope can cause.

You may have heard that softbaits don’t work over the coast and I’ve had some frustrating times trying to catch fish on them. However, I’ve also had some very successful softbaiting experiences, especially in close behind the breakers.

Slowjigs cast out the back and left to their own devices with the rod left in the holder can be productive too, especially on gurnard.

This part of the ocean bed is pretty flat although further south of the Waikato River there is some interesting geography, especially around Limestone Downs, an area that holds crayfish, snapper and kingfish.

Generally the seabed is all sand with very few small patches of foul. There’s plenty of variety out there though when it comes to fish life, kahawai are usually prolific as can be snapper, gurnard and at times every type of shark you can possibly think of.

Striped marlin are only a short trip from Auckland with a black marlin turning up very rarely but most puzzling is the almost complete lack of blue marlin.

Also rare are yellowfin and big eye tuna, although it wasn’t always the case. Listen to stories of only 15 years ago and they were cursed for crashing marlin gear!

Albacore and skipjack can be plentiful at times and when you find them are easily caught on trolled lures.

Although they are fun to catch on light gear you’ll rue the day a marlin grabs your skippy lures on your 10kg snapper set.

I’ve seen a large variety of fish caught over the coast including blue cod, terakihi, skate, trevally, hapuka, bass and mahi-mahi as well as those previously mentioned.

Of course fishing just wouldn’t be fishing if it was all too easy and it isn’t always easy out west but it is always interesting and always exciting. There are a few things that aren’t a lot of fun out there and sharks are one of those things.

The novelty of catching toothy critters can wear off pretty quickly, especially over winter when it is common to catch tope, bronze whalers, spiny dogfish and carpet sharks with a few barracouta thrown in for good measure. Spiny dogfish especially can be in plague proportions in cooler weather and it’s important to recognise them and the dangers they present to the unwary.

They are generally small sharks of under a metre in length but have wickedly sharp spines behind their dorsal and adipose fins. If sharks are a nuisance it’s time to move. Go deeper or shallower, whatever strikes your fancy, just move!

The west is well worth considering, from marlin to snapper it really does have it all.