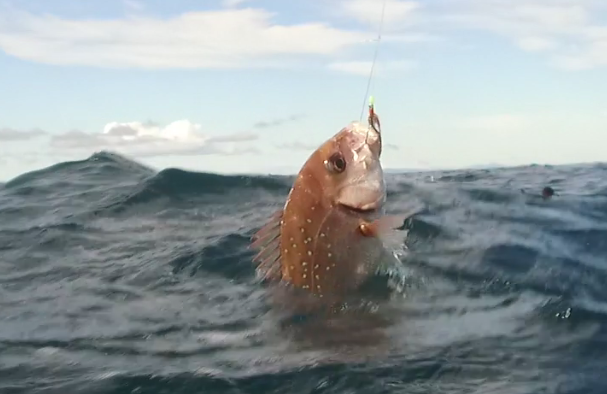 With all the advancements in artificial lures over recent years, many fishers have abandoned their trusty bait gear. But bait fishing is still a great way to catch fish and, as John Durrant discovered, there’s a few advancements in the traditional methods too. Flash lures and scent-infused softbaits are all fishos seem to talk about these days.

The huge developments in lure fishing over the last decade have left traditional bait methods a little out in the cold.

It has been said that when you’re selling fishing gear, it doesn’t need to catch fish, it just needs to catch the angler and that’s perhaps why lures, jigs and softbaits are so incredibly popular these days.

This is another source of debate between bait fishos but a good rule of thumb to follow is: Strayline in water depths of less than 20 metres and use a dropper rig in 20m-plus. Straylining is particularly effective for fishing into shallow-water reefs.

The poor old pilchard or squid can never compete with a shiny new slowjig all packaged up in a fancy box so it was shunned by many fishos.

But over the last couple of years, fishing tackle retailers have reported somewhat of a resurgence in the popularity of bait fishing. It has always been popular but recently there’s been an uptake in bait and it’s probably down to the new products that have hit the market.

Nowadays, bait fishing doesn’t necessarily mean using half a pilchard on a dropper rig. There’s a whole new range of bait options and methods and fishos have lapped it up.

Of particular note, there’s a new generation of gourmet baits available for the discerning angler and, over the last two seasons, these have been hugely popular.

Retailers realised that bait fishers were after something new.

Purists will always go for the tried and tested and there can be no doubt that a piece of mullet or half a pilchard sent down to the bottom can be hard to resist for most fish. However, variety can be one of your best friends on tough days and it’s precisely then that you should look to try something different.

The Top Catch chain is one of the biggest purveyors of quality baits and the company has introduced a number of new products that fishos have lapped up.

As well as the usual suspects, Top Catch offers baits such as its Bullet Bonito range and baby blue mackerel.

Dave Mitchell is manager of Top Catch’s Clevedon branch and one of Auckland’s most respected bait fishermen.

He says that the tried and trusted options are a good place to start but as fishos get more acquainted with methods, they should look to other baits.

“Most guys, your average Joe Blow, will generally take pillies or squid. A lot of guys will also take mullet and these are the types of bait that they’ve grown up with over the years.

“These really were the meat and potatoes for 10, 15 years until Top Catch came along and started introducing gourmet baits,” he says.

“Pillies, squid and mullet will get you a fish, no doubt about it but taking one bait generally won’t be enough as you get different schools coming through at different times of the day and they won’t all want to feed on the same thing.

“I always say to people, you don’t eat the same thing all day every day and neither do fish so it’s important.”

Before you even hit the water, you have to decide on what baits you’ll be taking and all baits come with their pros and cons.

Some baits are oily but not so tough, others might not be as pungent but they are great for staying on your hook.

It’s a good idea to take at least two different types of bait. Choose one on the basis of durability and an oily bait that will work as a good fish attractant.

Pilchards are great baits with a proven track record but one of the failings in using them is that they are not particularly tough.

Another option to use would be bonito. They are just as effective as pilchards but the advantage is they are incredibly tough baits.

Squid is a surprisingly tough bait to use also but at times snapper seem to completely ignore them in favour of cut baits.

John Durrant with a fine snapper from off the rocks, caught with a straylined pilchard.

So you’ve tried the usual suspects and no doubt you’re having success with them, but you’ll probably want to have a look at other options just to make things interesting. Dave has a few favourites in the gourmet range.

“Salmon smolt – high in oil – is a great bait and definitely one for straylining back in the berley trail for big snapper. “It’s not one that a lot of guys will have used before but it really is dynamite.

“Bullet bonito, one of our new products, is another one that’s high in oil. It’s fully-grown but the same size as a pilchard. “Any bait that causes an oil slick out there is an attractant to fish.”

“Baby blue mackerel is a dynamite bait,” says Dave. “It’s tough, high in oil and you can’t catch them regularly yourself so it’s one that could prove to be the difference.”

Whole piper on a two-hook strayline rig can tempt many species, including kingfish.

There’s heaps of different ways to rig baits but usually keeping it simple is best when fishing for snapper.

If you prefer to cut your bait, a good tip is to cut it into a triangle about the size of your thumb and hook it through the widest end. Doing it this way will stop the bait from spinning in the water and presents it more naturally.

The people’s favourite - pilchard – is generally best used whole. Hook it through the head behind the dorsal and tie a little half hitch around the tail to present it as straight as possible. The same technique can be used for Top Catch’s Bullet Bonito baits.

Dave Mitchell only uses hook sizes of 7/0 upwards. He says: “It’s only the point that catches the fish. Don’t think that big hooks will only catch big fish. Any fish will still take a big hook and that’s been proved a thousands times. Smaller hooks tend to get swallowed easier. To save the fish I prefer to use a bigger hook.

“When it comes to hook type, in winter I use a Mustad Penetrator – it has a thinner gauge steel and it’s easier to set the hook.

“In summer I use Gamakatsu Octopus hooks. Circle hooks are great as fish can hook themselves and the fish can be released a lot easier.”