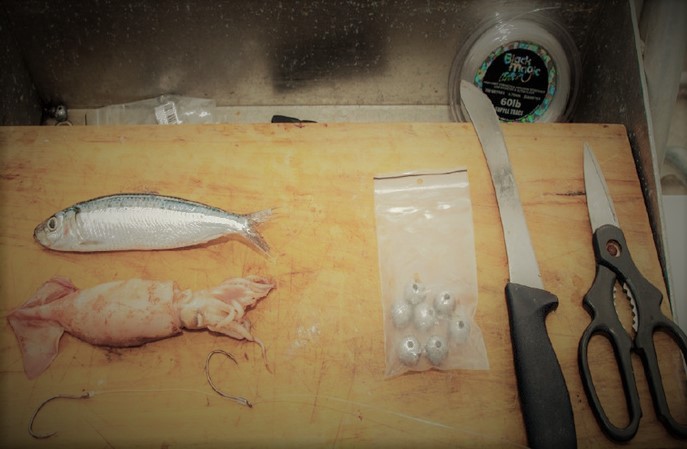 1. Prepare a standard 2-hook trace. The author prefers to fix both hooks in place. The first hook is attached with a uni-knot while the second is snelled to the trace. Using a sharp knife remove and dispose of the squid tentacles.

2. Using a finger, create a cavity in the squid tube, large enough to receive the head end of the pilchard.

3&4. Insert the pilchard into the exposed cavity and push it as far as it will go without tearing the squid tube. The result should look like image four.

6. Wrap the trace a couple of times around the pilchard and repeat the process with the second hook, this time from the opposite side and about 2/3rds of the way towards the tail.

7. Secure the rig with a pair half hitches snugly around the tail of the pilchard. This is to allow for correct presentation when under attack by smaller fish.

Note
I first saw this rig demonstrated on an old-school Bill Hohepa TV show. I like to use it when my instincts tell me a bigger fish can be taken with a big bait, but the tiddlers are making short work of the current offerings. The squid tube helps hold the whole bait intact until it attracts the attention of something big enough to take it in one bite.