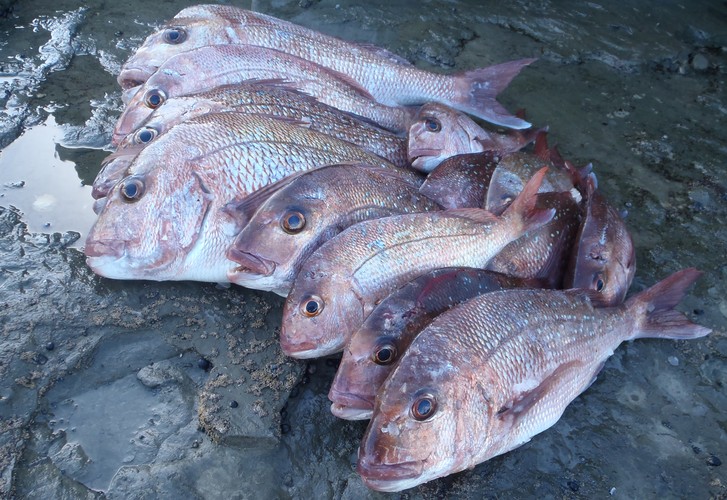 Most serious rock fishos only feel comfortable when they have a soupy brew fanning out into the depths. Tom Lusk gives us his favourite recipes that the fish will love. The principle is simple: bring the fish from far and wide with delicious oily smells and fragments then get them in the mood to feed, so that when they see your bait drifting along, they won’t be able to resist.

However, getting this right is not always straightforward, and some thought and planning will go a long way to ensure you maximise the benefits.

Firstly, what is the best berley to use on the rocks? For my money, the number one most attractive smell to put in the water is salmon.

I’ve heard that one-kilo of salmon produces the same watery aroma as 5-kilos of Jack mackerel. Imagine the essence of all those mackerel concentrated into one kilo of salmon goop and you can understand why it is so effective.

Recently, a salmon berley we’d deployed even brought in a big female great white shark, which hung around for a good ten minutes. Needless to say, we didn’t try and tangle with the big girl.

Salmon does however have two major drawbacks. It has the twin evils of being both more expensive and having a much faster melt rate than other mixtures. If the water is choppy a berley bag of salmon can be gone in short 30 minutes. This is, of course, to the somewhat short-lived delight of the fish.

There are a couple of ways around this. Firstly, don’t remove the berley log from the thick plastic wrapping, and don’t stab the wrapping haphazardly with a bait knife. Instead, just cut a rectangle about the size of a matchbox in the side of the log. Putting the hole in the side will stop the salmon mince from oozing out the bottom under the weight of gravity.

You might need to stand on the log a bit to soften it up and encourage the initial flow, but once it gets going, you’re away. Another salmon-saver is to put something in the bag that will float, like a plastic bottle or a live bait balloon. This keeps the berley away from the rocks, so it doesn’t get pounded against them. Ideally, you should be getting about an hour per kilo of berley.

Adding to the stew

Another way to ensure your precious salmon lasts the distance is to allow it to melt in a bucket, then use a spoon to fling small scoops of it out with precision. Chinese and Korean fishing shops sell ladles for this purpose.

You can boost the quantity of your berley by adding inexpensive, absorptive foods like cheap white bread and rolled oats. White bread is actually one of my favourite constituents of a berley because it stays up on the surface, allowing you to see when kahawai schools are hanging around out the back. I’ve even had a crazed school of kings smash it down excitedly.

If you go down this road, don’t be tempted to fill the bucket with seawater. Just put in enough water to make a very thick, disgusting stew; this consistency will allow you to flick out golf-balls of goo with accuracy. With salmon, a little goes a very long way, and with the bucket method you keep a very good handle on how fast your berley is running out.

A good berley trail is particularly important on the tougher fishing days. This brace of small pan fish is nice but don't be surprised to see a 20lber sitting under your berley bag.

The other popular fish-based berley types made from tuna or pilchards are of course also excellent, and will outlast salmon at a rate of two to one.

Shellfish-based mixtures, most commonly mussel, tend to melt about as quickly as salmon, and don’t create the greasy surface slick of fish berleys.

They also have the advantage of being beloved by trevally, and are less appealing to sharks. This is beneficial in areas like the Manukau Harbour.

A good way of stretching your berley is to pre-melt a small amount in a bucket, and then dip your bait in it just before casting. In this way, you start a concentrated area of action at the extent of your cast.

A big problem for rock fisho’s is getting hold of a berley bag that’s strong enough to handle the rigours of the environment. The flimsy mesh bags that come with the smaller bombs will tear at first contact with the rocks.

Onion sacks, which work well from a boat, are not much good on rocks when there’s any sort of swell. They will get hooked on the rocks or barnacles, and the weave will separate, allowing the berley bomb to float out and away. I’ve had this happen on several occasions over the years, and have had to swim out and retrieve an escaping ogre-turd of berley. Not much fun in the winter!

What is needed is wide, bulletproof mesh that will last years. I haven’t yet been able to find one of these commercially, although some cray catch bags can do the trick for a while.
There are some cheapies in the shops that will do in the short term, but pretty soon they’ll develop a tear, and the whole thing will collapse.

One solution is tough plastic fencing sold in garden centres. A half-metre square of this can be folded over the berley in its plastic sheath, and the edges of the square loosely tied up to hold the whole sandwich together.

This system has the advantages of being cheap and quick to put together, but it is bulky and awkward, particularly if it’s tied to the outside of your pack and you’re going through bush to get to your spot.

If you’re really serious about your rock fishing, a good option is to make your own long-life bag from the thick black or orange mesh used on cray pots. Making one of these is fairly straightforward, and is reasonably cheap, depending on how you do it. The critical components are really just the cray mesh. This can be bought from Trade Me for about $13 per square metre. One square metre should be enough for two bags and rope.

Taking this design a step further is the deluxe model. This model incorporates a drawstring rope, a big swivel (to offset the bag’s rolling and twisting), a grunty carabineer, a line keeper and a rock jam to hold it all securely to the rocks.

I like to tart my bag up with some unnecessary additions, like sailing thimbles and heat-shrink to cover the bindings. These aren’t crucial, but do make the whole package a bit more rugged and functional.

There is one other dispenser that deserves a mention: The classic white-lidded bucket with holes drilled around the sides. The bucket has the advantage that you can fill it with stuff on the walk in and out. It’s also very solid, and probably about as resilient as the rock bag described above.

One thing to upgrade if you’re going to use the bucket is the handle. The handles are usually joined to the bucket with relatively fragile lugs, so it’s better to replace these with a rope. This can be attached via two holes drilled in the upper sides of the bucket.