Day trip to the Ranfurly Banks 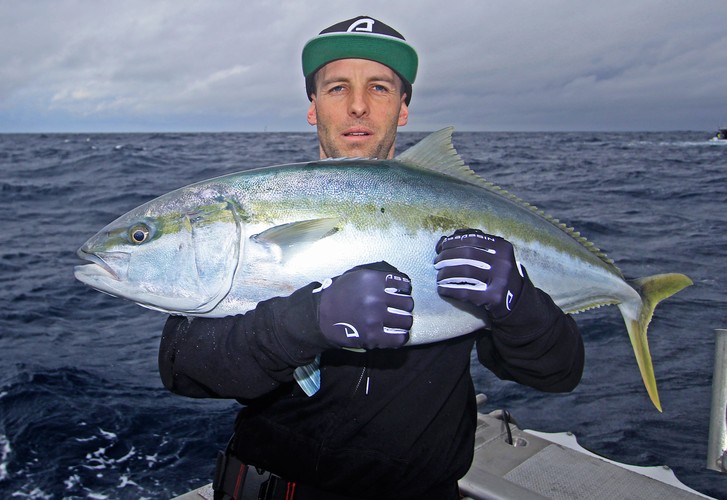 Proving the best trips come at short notice, Aaron’s crew race to the Ranfurly for an epic day to remember

Has the crap weather got you down? Me too. Hot Autumn fishing feels like distant memory. That was until the Thursday night my mate Arron Sargent from Coastal Fishing Charters called.
“Mate, the Banks are firing, you have to get down here. I have a day available so get a crew sorted and get down here Saturday", he bellowed into my earpiece

Who am I to turn down the Ranfurly Banks, especially when Sarge says its firing. A crew consisting of Kelly, Sam, James, Tina and myself was slapped together. 2am Saturday morning went off and we hit the road from Tauranga to Hicks Bay. We finally arrive at Hicks about 6am, bleary-eyed but  pumped for the adventure ahead.

The forecast was relatively good for Ranfurly Banks; a one-metre swell with 20 knots on top. With the boat loaded to the gunwales with 300 and 400-gram jigs, we set sail for puka heaven.

Unusually, Sarge took a detour for a nearby bay. Down went the anchor, quickly followed by a little berley and within 10 minutes we are pulling up quad headers of mackerel one after another.
30 minutes into it I said "Mate, we have enough bait to create our own work up!" “Nah", Sarge replies "We will need all of those".

By 9am we are on the Ranfurly Bank, over a ridge with a depth of 120 meters. The sounder is loaded from the bottom up to 70 meters and shows solid kingfish sign.
James is the first to drop a livey, as he is the Ranfurly Virgin. He wasn’t too sure what to expect but we said be ready for some hurt.

As they say, "there is never a dull moment on the banks". Too right, and within moments of his bait hitting the hot zone (100m), the line started ripping from his reel. With drag lever at sunset James was buckled under the strain of his first Ranfurly Banks kingfish.

In the middle of winter these kings are fat, aggressive and hard fighting. A good tussle later and James had his king on the deck. Estimated at 18 kilo, a few quick snaps and this one was released. We all dropped in livebait, leaving the jigs in the bag for now. The fishing was hot with solid kings continuously coming aboard, each appearing in better condition than the last.

With aching arms we kept dropping baits in the hunt for fish over the magic 30 kilo mark. It was Kelly of all people (she does attract good fish) who got hooked into the best fish. This was a brilliant tug of war. Kelly would gain line to only lose it even faster. Finally, after a sinew burning scrap and some loud encouragement Kelly beat a beaut of a king. It looked fat and for all money 30kg, but alas the scales told the truth pulling the marker into the very late 20s. Still, one heck of a fish and safe to say the team was now pumped.

It was now 2pm and we hadn’t put a fish in the bin. The call was made to leave the kings alone and go on the prowl for fat eastern hapuka.Keeping to the same rigs Sarge headed further south for 5 minutes. Upon arrival at destination PUKA, Sarge exclaimed "Holy heck Aaron, check this out!" Now those are the kind of words I like to hear. A quick glance at the sounder showed 30 meters of thick bottom sign. Definitely what we came for.

With livies away, my knees were shaking with the anticipation of what was about to present itself from below. The last time we were here I landed a 45kg puka on my second drop with a jig.
Before the lead hit the bottom two rods loaded and it was puka time!

For the next two hours we turned nearly every remaining live bait into a hapuka. Doubles were the norm for the rest of the afternoon. The wind had settled and the fishing just got hotter.

But then we ran into a wee issue. The man we all despise so dearly, Mr Mako, started collecting his due.

All the bigger sized fish soon started popping up less a tail. Regardless, the fish were coming so we were not too worried as we weren't losing much of the prime eating flesh.

The competition had heated up among the crew, all keen to take the biggest fish honours. Sammy was sitting on that throne until you-know-who got into the action.

With her rod folded in half Kelly was into it. Providing you don’t let their heads turn, hapuka fight like a bucket but let them get a sniff of the bottom and you will know all about it. Those huge tails can really power up when they hit top gear.

Eventually Kelly's line starts to head out the back, which is a tell tale sign it’s a hapuka. Bubble, bubble, pop, pop and one heck of a solid fish hit the surface. It's not over with Kelly frantically winching the fish to the boat knowing ole tax man isn’t far off. At 30kg it’s the fish of the day in any category. A few quick photos and it's dispatched to the chill-out box.

So, another solid trip to the Ranfurly Banks done and dusted on-board the mighty vessel Strictly Fishing.

For the entire day, there was only one drift where we didn’t hook fish. Sarge and crew really know how to give you the best experience in the East Cape area. I highly recommend him for your next fishing charter.

If you ever get the offered the chance to fish the Ranfurly Banks I highly recommend you grab it with both arms and experience just how unreal the fishing can be. Having fished the location many times I am yet to experience a slow day. The fish maybe smaller on occasion but the quantity is still mind-boggling.

To make the most of the Banks head down there with a professional like Arron Sargent, a man who knows the place like the back of his hand. Arron fishes the Ranfurly all year round so he knows where fish move to through the seasons.

When fishing the Banks you definitely want to bring your A Game and the gear has to be up to the task. The last thing you want is to travel that far and spend that much money on a charter and get dealt to on sub-standard gear