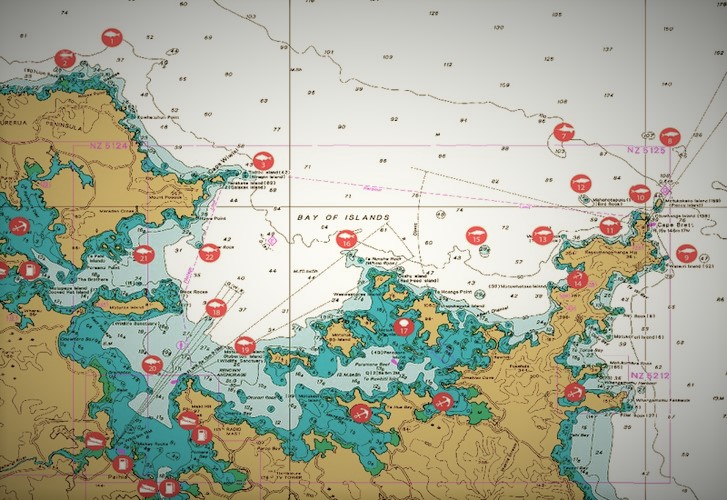 Famously celebrated as Zane Grey’s Anglers Eldorado the Bay of Islands continues to shine as a favourite all-weather fishing destination for both locals and visiting anglers from around the world. The author learnt his trade in the Bay fishing every nook and cranny it’s hundreds of islands and rocky cliffs hide.

This inshore kingfish ground is heavily fished but continues to produce the goods. Pay close attention to the sounder and fish the marks as you see them. Jigging and deep-fished livebaits work equally well.

2. The Needles and Lion Rock - crayfish

Good hunter diver country. This whole coast is worth exploring.

Target snapper on the bottom structure to the east of the main rock. Kingis often maraud the bait schools hanging around breaking rocks.

One the Bay’s best known marlin spots. Lures are best as you will need to cover ground. Hapuka can also be marked
and targeted.

Worth plenty of effort with lures on
the right day. Has produced numerous blue marlin.

6. Light of the Goat – marlin, hapuka

An area of foul ground starts in about 220m. The landmark is the Cape Brett lighthouse directly over Goat Island.

This shallow trench is part of an area often filled with skipjack and gannets.
If conditions look right two a couple of live skipjack.

10. The Hole in the Rock – kingfish, snapper

Both sides fish well depending on the tide. Look for baitfish on the surface as an indication of where to fish. Be wary of boat traffic suddenly appearing out of the Hole.

Can be very good snapper fishing, particularly on the northern side
of the bay’s entrance. Good in southwesterly winds.

As a rule the southwestern end fishes best. The author has hooked two marlin here when targeting kingfish.

A very good anchorage in an easterly. Fishing is banned here.

A great spot for keen jiggers. The pin rises sharply so be wary of lost gear.

Arguable the Bay of Islands most famous snapper spot. Many trophy fish taken here. Fishes best on an incoming tide with strayline. Use a sounder to find you own possie.

The inner island area is full of scallop beds. The 10m contour is a good place
to start looking.

Often holds very good numbers of fish. Use a sounder if anchoring although work ups are common so keep an eye open.

A stealthy approach in a small boat or kayak will yield good results. Shoal breaks heavily in an easterly swell.

Great spot to fish in strong northwest to northerly winds. Hunt the edge of the foul around the Motuterakihi Islands.

Fish the reel to the southeast of this rock for the best results. Watch for birds and work-ups towards the inner bay.