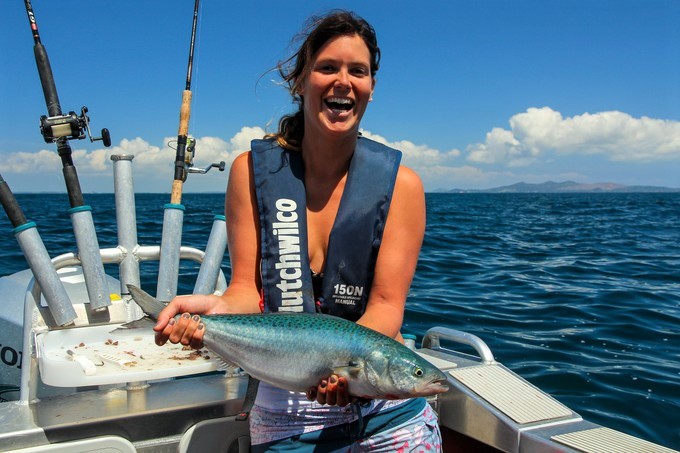 Perhaps Captain Cook should have investigated further instead of dismissing the uncharted six-nautical-mile-wide bay as he sailed past. His log references the note “doubtless a bay”, hence the name Doubtless Bay.

There is no doubt Doubtless Bay is one of New Zealand’s true fishing meccas with the majority of the country’s better table species and trophy fish up for grabs.

Set amongst a backdrop of hills and beaches, numerous reefs sheltering abundant marine life are enjoyed by hard-case locals. It’s a great spot to drift about with a line out and the chance of nailing something memorable is as high here as it is almost any other spot on the coast.

To successfully fish Doubtless Bay a good chart plotter/fish finder is a must. The underwater landscape consists of vast areas of sand and broken shell with scattered patches of foul – the sort of country only quality gear can decipher but which hides good numbers of fish if you know what to look for.

There’s also a couple of substantial reefs to keep an eye out for – Fairway and Albert. While both can be navigational hazards they’re also prime fishing locations on the right day.

With the geography lesson covered it’s time to hit the water.

Getting in the water

Taipa, with its close proximity to fuel, ample parking, and the convenience of a wharf/floating pontoon to tie up to, is by far the most popular. It is important to be aware of the strong tidal flow (especially mid-outgoing tide) as wellas the shallows at low on spring tides.

Over the hill at Mangonui, Mill Bay offers a sheltered all-tide concrete ramp and floating pontoon but parking can be a challenge on busy days.

Apart from a few patches of foul that can hold fish it’s more about the depth the fish are feeding rather than a secret spot x. Look for patches of sign hard on the bottom. These usually indicate snapper feeding on the abundant tua tuas and toe-torturing paddle crabs.

Berley will further increase your chances of success and will often attract baitfish and the inquisitive predators that follow – including kingies.

We’ve enjoyed some epic snapper sessions at both sunrise and sunset in depths ranging from six to ten metres. My rig of preference when fishing the beach is a minimally weighted whole pilchard or squid, cast well out the back on the bait runner. If the fishing’s a bit quiet I will leave it in place to look after itself and strayline with another on an overhead set-up for good measure.

Flicking soft baits around is also a sure-bet. Once the sun’s up the fish tend to favour the security of the deeper water further out, usually somewhere around the 18 to 20-metre mark or beyond. Again, let your sounder be the guide on the day.

Mangonui’s famous for its fish and chip shop but the wharf is also renowned for the kingfish regularly caught off it in the summer months. If you plan to have a crack at these guys take heavy tackle as there are plenty of obstacles to ruin the day.

The sheltered harbour provides plenty of shallow water straylining opportunities. Look towards the rock-laden area between Oyster Point and Rangitoto Point for a good feed of pannies – especially if it’s blowing out in the bay.

Heading out from Mangonui into Doubtless Bay look for nature’s fish finders diving or floating about. The gannets know where the snapper are and can be seen from quite a distance.

Kingfish also cruise this area so be prepared for anything. I accidentally caught a 93cm kingie on a flasher rig here once. Well, technically the rod holder caught it, but I did all the hard work so I’ll claim it).

The Coopers Beach area features plenty of close-in foul, which is well worth prospecting with soft baits. Better still, if you have the time try anchoring up and pumping a berley trail into the foul, followed by a strayline.

With fish in such close proximity to the beach, it’s no surprise Coopers is a hot spot for kayak fisho’s. If the fishing’s been tough, casting soft baits into the wash and around the structure can often produce a feed of kelpies or kahawai to save the ego.

While we’re on the subject of egos, I once handed my soft-bait virgin of a cousin my favourite Shimano outfit. Being a good bloke I’d kindly rigged it with a 3/8-ounce jig head and a 5” Nuclear Chicken Gulp. One cast later and an 18-pound snapper was pulled out of two metres of water whilst drifting over one of the submerged rocks in this area. Needless to say, I still haven’t heard the end of that one.

In calm conditions this is a great spot to take the young ones for a fishing trip they’ll never forget. Large schools of kahawai, and sometimes kingfish, can be found feeding nearby. Look for the birds for guidance. If bled immediately and placed on ice, kahawai sashimi is quite the delicacy and I’m sure I don’t have to mention that smoked kingfish is pretty spectacular too.

Speaking of kingfish, Berghan’s Point is a good spot to drift around with a livie deployed. The rocky coastline south from Berghan’s, down towards Motutara Island, drops away steeply but features a few gutters to pump a berley trail into on the incoming tide. A feed of snapper and kahawai is usually the prize of the patient.

Be wary of the Fairway Reef area as its highest point sits just below the surface at high tide.

Generally, it’s clearly visible when any sort of swell is running though. Trophy snapper are often caught here and its structure bodes well for pelagics too.

Study chart NZ5114 for clues and use the wind and current to your advantage to target likely looking haunts.

One glance at chart NZ5114 and you’ll see why this area holds so much promise. Snapper, kingfish, and kahawai are all on the menu.  Use minimal weight and decent leaders to minimise bust-offs.

If you’re like me, you’ll be partial to garlic butter crayfish on the BBQ. The coastline from Berghan’s Point back down towards Hihi Beach, offers many rocky outcrops and rocky bays to go on the hunt for crays. Look for the cray pots and the structure above the waterline for clues. We rarely go deeper than 10 metres in the summer months.

On the opposite side of the bay the Brodie’s Creek to Whatuwhiwhi coastline offers similar country but as it’s lot more accessible by road and small boats so it gets a fair bit of attention from scuba divers and spearos alike – especially in holiday periods.

Early morning and late evening provides the most productive fishing (and often the most relaxed) as the bay has a habit of getting choppy around midday to late afternoon, even on variable forecasts.

The bay’s close proximity to blue water also offers many capable trailer boat owners a real chance at catching a marlin, broadbill, hapuku or bluenose with hotspots like the Garden Patch within range of a day’s fishing excursion in favourable weather.

The suggested spots above are only a taste of the angling opportunities available, but should give you somewhere to drop a line in any wind direction. If you’re struggling for luck or just get thirsty, the Taipa Tavern is a local knowledge hotspot so is worth stopping in to gather intel over a cold pint or two.