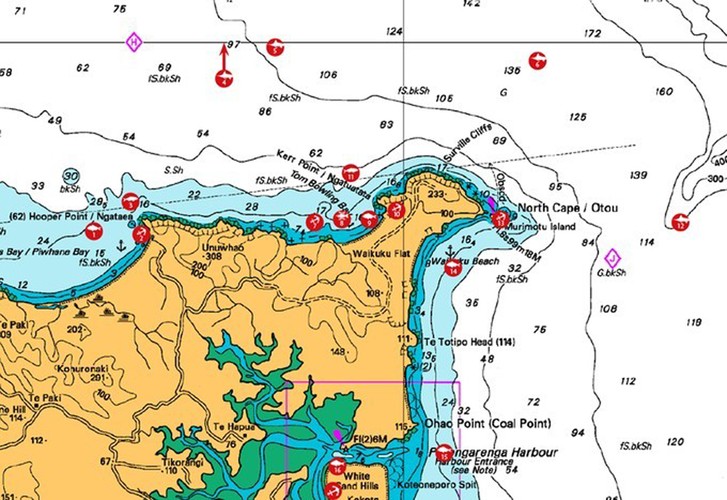 Remote, wild, unforgiving but oh so worth the effort when you get there, this northern part of the mainland offers trailerboat-based explorers the closest thing to an untouched fishery they can realistically access on a limited range.

Excellent bottom fishing for snapper and big trevally. Kingfish also common so float out a livebait.

A good anchorage in settled weather. Not the best holding in any real wind and has a reef behind it so use with caution. Usually has swell either from the west or the east, sometimes both at once.

That this rock is adjacent one of the most prized land-based spots in the country, tells the story. It is shallow so try poppers, stick-baits and livebaits.

Of the three grander blue marlin caught in New Zealand, two of them came from this single location. Say no more. Oh, except that the bottom fishing is great as well.

When this area fires, look out!. Watch the gannets, this is work up fishing at its best. Fresh livebaits to pitch into meatballs are a must.

More consistent than Hooper’s Point but less intense. Towing live skipjack will produce regular bites when the conditions are right.

Preferred anchorage on the Northern Coast in southwesterly winds. The roll came be a pain when the tide is wrong but it is safe, if somewhat uncomfortable. Look for squid under your lights.

Great diving but does have a significant current at times so always buddy dive with all the safety gear.

A good dusk fishing spot for snapper. Strayline for best results when the current is favourable.

The most popular side of the bay. Can be very crowded and watch for rocks as the chart is not great.

A great rock to fish on the change of tide. Heavy current makes it challenging otherwise. Be wary of cray pots exposing  on the slack tide.

Very consistent marlin holding area. Livebaiting works well if the fish are around. Author once caught three blue marlin in one day just trolling plastic back and forth. Large schools of bait usually hang in the shallower water near the Cape, with marlin just outside. Look for rocks on the bottom as they hold fish.

Reasonable anchorage in northwest to northeast winds. Is often very busy and has relatively poor holding so a watch is advised.

Numerous bommies which hold fish in the 10 to 25 metre line. Cruise slowly through this area and you will soon find a spot to fish.

Look for the foul ground, which drops away on the 30m mark. Outgoing tide can fish spectacularly with the current from the harbour carrying found out over the drop-off.

A spot unlike any other in New Zealand and should be on the bucket list for all. Great fishing at times with opportunities to try shallow water techniques like salt-water fly. Never attempt the bar in an easterly.