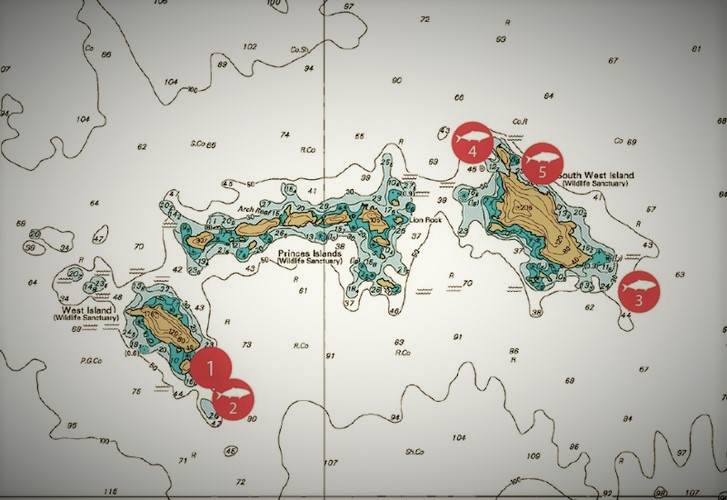 The ultimate fishing destination for many, the famous Three Kings Islands and its associated banks, represent the pinnacle of recreational fishing in New Zealand. Trophy sized striped marlin, blue marlin, and swordfish are all caught routinely, as are comparatively oversized kingfish, hapuka and bluenose. Black marlin, yellowfin tuna, big eye tuna and bluefin tuna all show up frequently enough to be considered a realistic prospect on the right day.

Kelly Talton famously put great effort into attempting to salvage around 2.5 milllion dollars of bullion and coins from this wreck. He was at least partly successful. This is a very challenging dive and should only be undertaken with detailed planning.

Both the 26m pinnacle and the adjacent island wall, fish well. Look for bait and target with speed jigs and live koheru.

Either spot is productive when targeted with live koheru. Look for bait sign on the surface and marks in mid water. Hapuka also common.

Koheru can be caught on point between Crater Bay and North West Bay. Plenty of trophy kingfish have been taken here.

NW Bay is the more popular of the two main anchorages on Great Island. Koheru and squid can be caught under lights and in the morning. Kingfish are common and the diving in towards the boulder fall is stunning and productive.

SE Bay is good anchorage in the right conditions. Plenty of diving options can be found. Target kingfish at Farmer Rocks.

The single most important fishing spot in New Zealand. Marlin, kingfish, hapuka, you name it, it’s here. The writer’s best fish from this location is a 384kg blue marlin.

Like the Magnet, a hugely productive region of the bank.

Certainly worth exploring when the blue water is here. The bottom fishing is terrific as well.

Quality spot worth a couple of hour’s effort, and within reach of North Cape in a day trip.