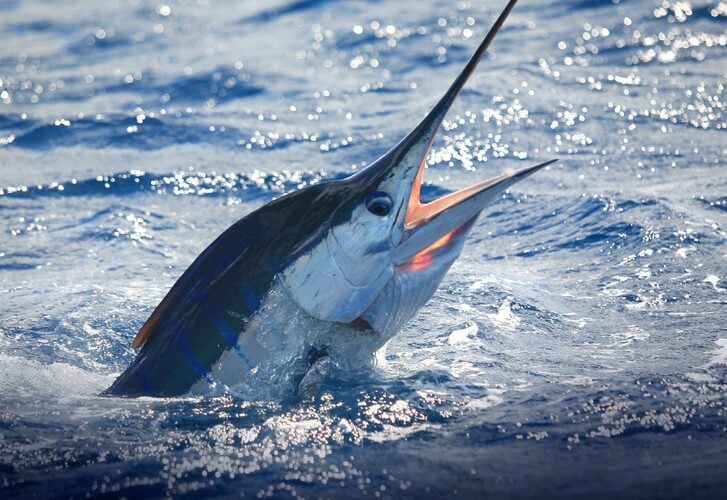 I have always known there is an element of luck involved when it comes to game fishing and like most achievements in life it takes a lot of perseverance and patience. It cost me roughly 15 days on the water before I landed mine. Rewind the clock 100 years and you’ll discover NZ was famous for being one of the pioneering nations of big game fishing. The first capture of a striped marlin on rod and reel in this country tipped the scales to 101kg, almost certainly a record for the species at that time.

Today there’s a rapidly increasing number of anglers with strong, fast, and affordable trailer boats. These pocket battleships give many of us the resources to target whatever fish we want, including the mighty marlin.

As an achievement, landing my first marlin on my own boat is one of those I am most proud of and the smile didn’t leave my face for days.

There are a few basics to understand when targeting marlin but once you have these down its not as daunting as it seems.

First things first, invest in high quality gear. You don’t want to turn up at a gunfight with a butter knife. Imagine hooking a trophy fish and fighting it for hours only to have a cheap hook break on the leader!

Set yourself up with quality gear and you won’t regret it.

Marlin are pelagic and migratory fish, which return to our waters during the warmer months when the water temperature rises.

As a rule, they turn up in our waters when the temperature climbs above 18.3° Celsius, generally from late December to late May, depending on the currents.

Our Exclusive Economic Zone (EEZ) reaches out 200 nautical miles from the coastline of NZ. Within the EEZ a moratorium exists, which prevents marlin from being commercially harvested. In effect all marlin species are exclusively preserved for recreational anglers within New Zealand’s EEZ.

In general terms only, the warmer the water the better, so when I plan a trip marlin fishing I like to follow the sea surface temperature maps (SSTs) which indicate the different water temperatures of the east and west coasts.

This summer (2014/2015) is regarded as one of the best game fishing seasons of the past decade with the first marling being tagged on December 6th – they usually arrive just after Christmas and before the New Year.

The run of yellowfin in our waters during early January was also a welcome surprise and I hope they return to our shores for years to come.

In my opinion, the key to marlin fishing is having your ear to the ground with the locals. Pop into the local game fishing club, shout a round or two and it won’t take long to get the hot gossip. Better still, ring around your trusted mates who have recently been on the water. Accurate information is gold and can make the search ground a whole lot smaller.

The night before I landed my marlin I had stopped in at a local fishing competition’s prizegiving. On the Saturday there was five marlin tagged and five marlin landed before 11am. On Sunday the coast had been shut down due to gale force winds and swell.

Knowing that the bite was fierce and no one had been able to get out on the water it seemed obvious the fish would be hungry on the Monday when the weather had cleared. We had plans to film a different episode on Monday but after hearing of such red-hot fishing, we quickly changed our plans because all the signs looked good.

Put the time in

A lot of marlin fisherman will agree that if you put in the time on the water you will catch yourself a fish.

Asking around, it seems there’s an unwritten rule where if you dedicate four consecutive days in an area where there are marlin being caught you will prevail.

Day one is used prospecting the area, marking baitfish and identifying the different behaviours of the birdlife and fish around you. If you get hits on your lures that don’t hook up, mark the locations and use this as a map of where to head for day two around the same time or even an hour later to account for the tide-time shift.

Once you are on the water it’s time to go into hunt mode and start thinking like a fish.

Marlin hang around food so if you see a school of baitfish on your sounder, mark it. If you see baitfish on the surface, that’s even better. When the baitfish are being pushed to the surface, this is best news of all. Trolling your lures around the schools of baitfish gives marlin the perception of a few rogue baitfish, in other words the lures are an easy meal.

Look for the signs

As stated it’s been a bumper season for marlin. These predatory fish have been consistent on the coast from the 70m mark all the way out to the 200m mark. The 100m has been particularly productive.

In reality there is no magic depth so referring back to local information is useful when comes deciding where to concentrate your efforts along a depth contour. Water colour also has its role to play when it comes to finding the hot spot. It is well known that marlin love majestic blue-purple water although that’s not to say that they are never caught in green water closer to land.

Often if gannets, sooty shearwater or black petrel are circling high over a small area it could that they are waiting for a predator to push the baitfish (like mackerel, herring and pilchards) to the surface.

The higher they dive the deeper the baitfish are holding. If you see these birds working an area nearby then that’s where the marlin are likely to be found.

Lure choice can be based on the bait in that area. Heading out to the spot the morning I landed mine we saw flying fish, saurie, squid and skippies , which helped us decide the lures to run that day. The lucky lure taken was a Red Gill Translucent Smoking Bodgey, which looks clear/white but glows blue in the water, imitating a lit up squid. 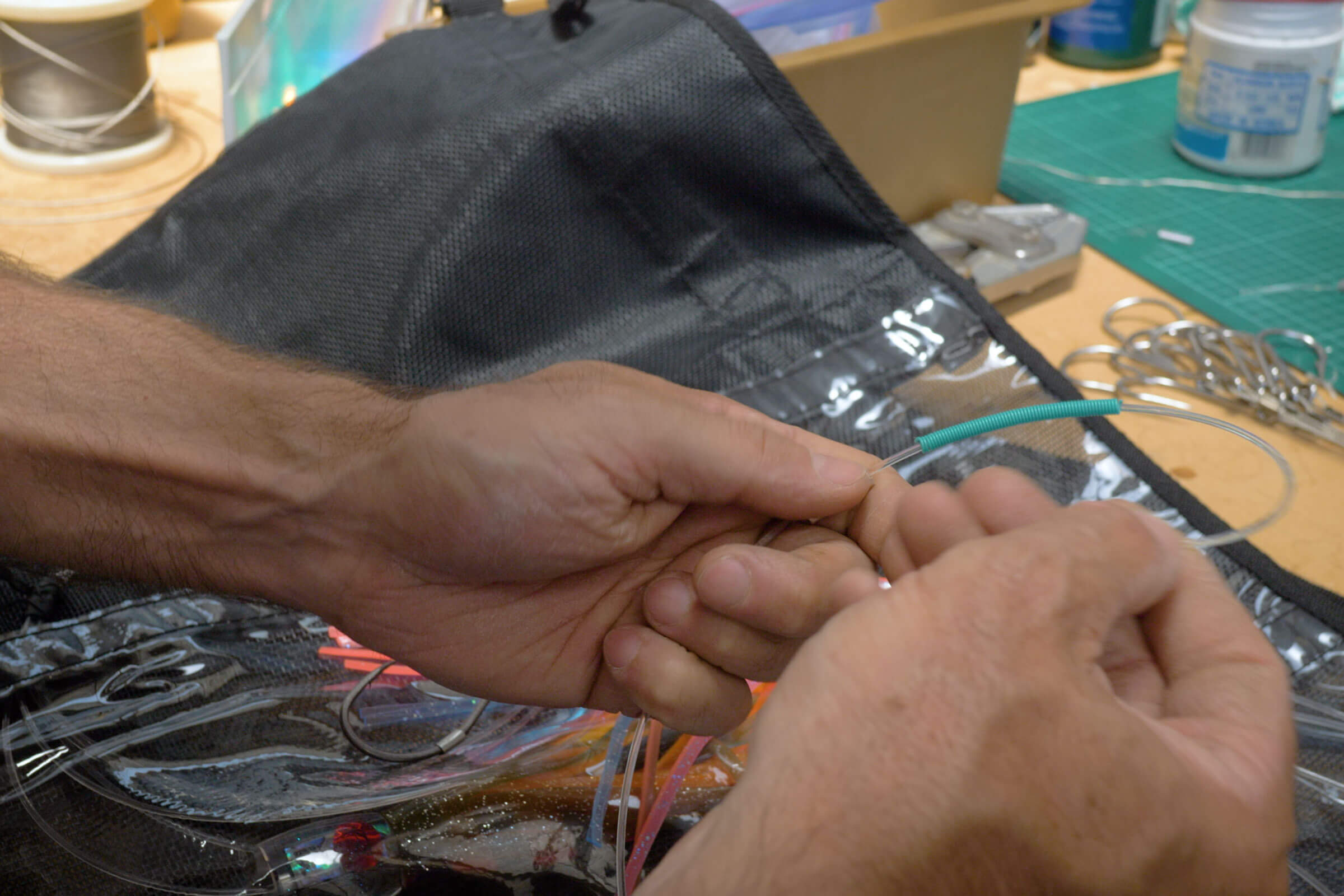 How to correctly crimp a game lure

Here is the correct way to crimp a lure using mono for tuna and marlin, as instructed by Bonze Fleet from Bonze Lures. 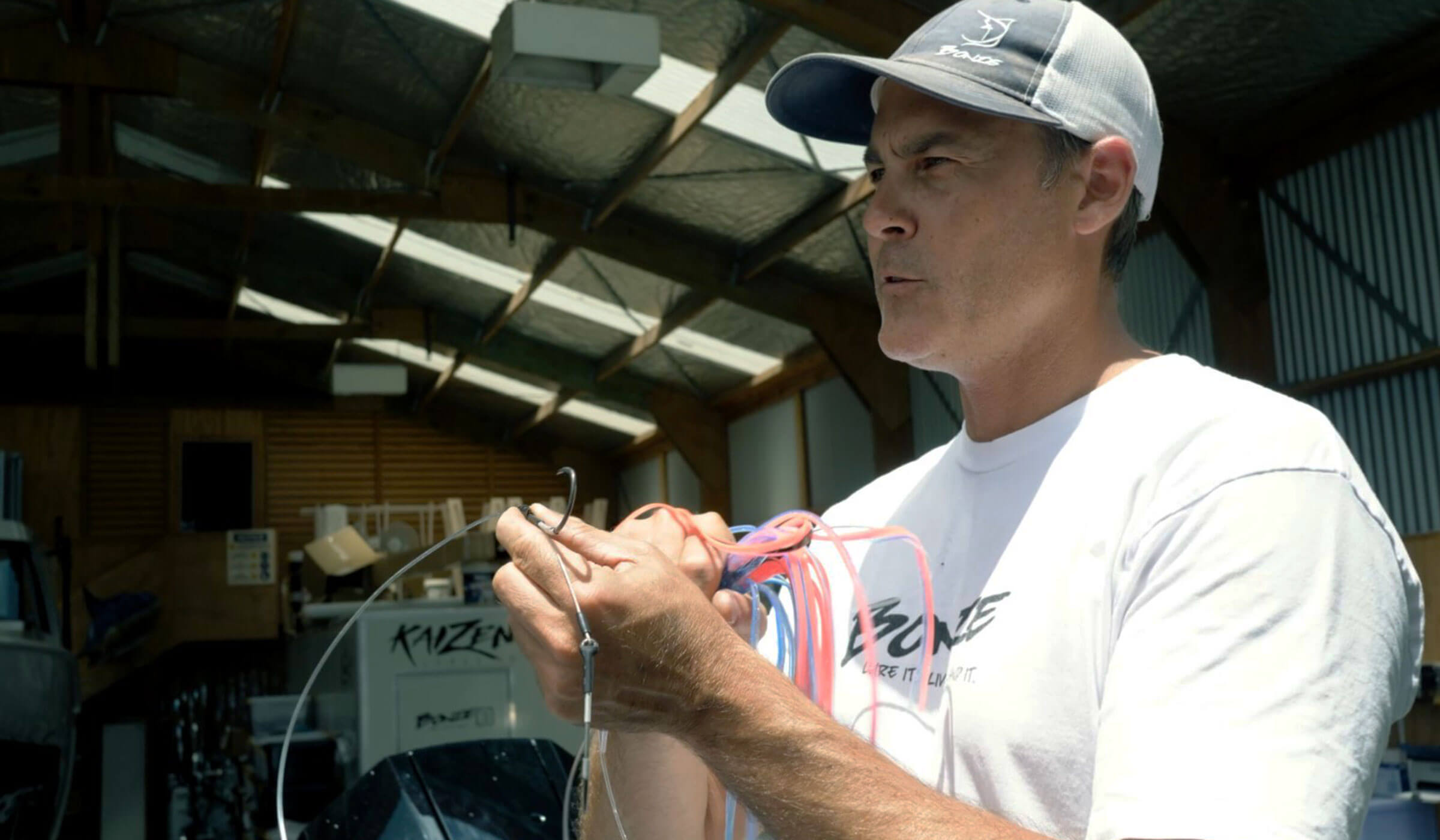 Talking to Bonze about rigging for marlin

Our north island road trip with young Flyn Jack (@Flyn Jack Fishing) had us dropping in to see the legendary Bonze (Bonze Lures) for some expert advice on rigging for marlin. Bonze is world famous as a true expert in his field, and if you want advice on how to catch marlin, Bonze is well worth listening to. It was so great to see such a busy man take the time out of his day to help out Flyn, and he gave us some great advice about setting up the boat, which eventually turned out to be very valuable, with Flyn landing his first marlin. It's pretty rough and ready, but I ran the camera to grab some of this advice as Bonze talked to Flyn, so take a look and you might pick up some tips. 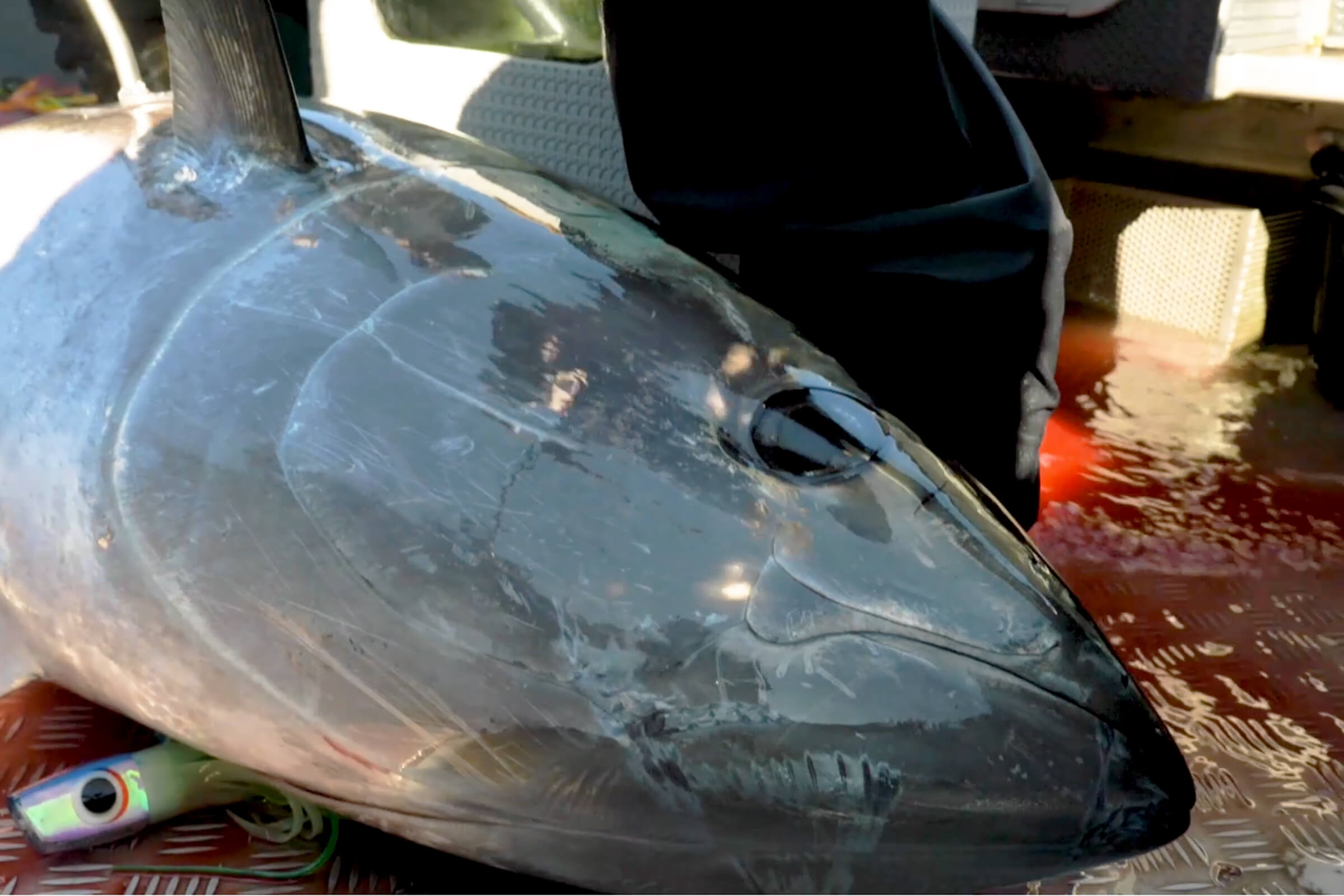 The mighty bluefin run that we are lucky enough to get off Waihau Bay each year was an absolute cracker this year. Check out a bit of footage we put together on board Coastal Charters with young Flyn Jack on the fish. 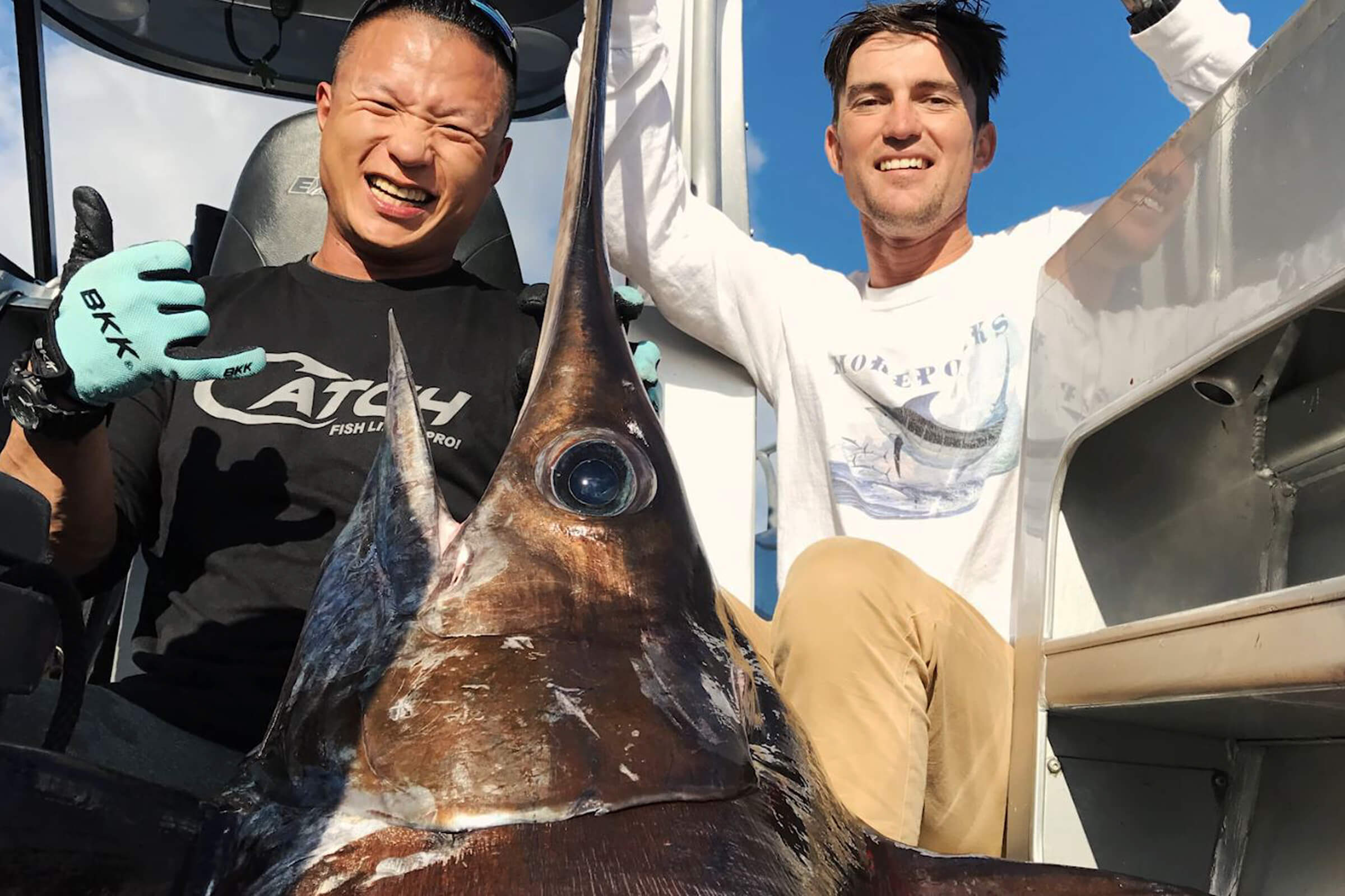 Check out some gold tips from the experts at catching yellowfin tuna. Luke from Yeehaa Fishing Tackle takes us through top lures, how to run them, and has some great advice if you want to target these fantastic fish.
All Related