Going to plan B - For when the conditions are tough 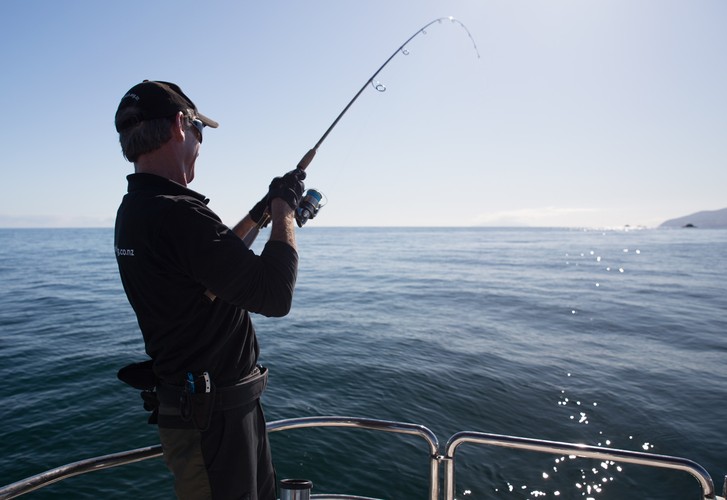 Sometimes catching fish in all situations means thinking outside the box. Our editor applies some science to lure fishing for those days when conditions are marginal for the techniques success

There’s nothing like a long, unproductive day on the water to make you question what you thought you knew catching fish.
It messes with your head.

I remember a particularly dry run back in my professional marlin fishing years. A couple of days ploughing an empty blue paddock turned into three … then five … then seven. Sure, it wasn’t a hot bite but my mates on other boats where raising a few where I could barely raise a finger to the fishing gods.

Being a sympathetic lot, my mates did exactly what I’d do, turning up the heat until I was quivering wreck, changing lures and speeds, even my lucky socks to get a glimmer of neon blue behind the boat.

One bloke, let’s call him Jason Wooton on the Te Ariki Nui - yes, you Jase - sensed the chance to tip me over the edge with this call over the radio. “Have you checked your prop recently? I scrubbed the Nui’s last night on anchor and we’ve been getting bit all day.” Well, that was it. I stopped the boat there and then - 35 miles off the coast and in 800 metres of water - and jumped in to polish the Independence’s twin propellers. Did it work? Not immediately.

Every problem has a solution

Just lately I’ve had a couple of very tough days’ lure fishing for snapper, albeit in the middle of winter.

As a rule, there needs to be actively feeding bird life and not too much wind. Unfortunately, much of winter lives at the other end of the spectrum. Solving this conundrum would require thinking outside the box…

When trying to solve any fishing problem I always like to start by writing down the things I know. Breaking down this intelligence into bite-sized portions went something like this:

What this tells me is that the key to catching fish on lures in a wider range of variables is likely to be as follows:
A: Finding ways to stay in touch with the lure on windier days
B: Finding ways to impart a bite-inducing motion in every situation
C: Getting fish to actively feed when they are not
D: Using lures around the rocks without snagging them all the time

From this point I drew up three scenarios and started experimenting from there.

Too windy to drift fish. Anchoring is the only option.

In many respects, this is classic old-school fishing where you find a sheltered spot that looks to be holding fish, put the anchor down and the jug on for a cup of tea. Ideally the wind and tide would be favourably lined up and flowing more or less in the same direction.

Most anglers would fish this situation with bait, either hard on the bottom or by straylining a bait out the back. The focus of our sessions was to see if we could get similar results with hard body lures.

Better fishermen know a berley trail is the way to turbo charge success in this circumstance, bringing more fish from the wider area and concentrating them in the strike zone behind the boat. Berley also helps to stimulate fish into a period of active feeding, something critical to the success of lure fishing in both our sessions. Experimenting thus, a generous chum trail was deployed.

We started by casting lures out the back, letting them sink to the bottom and retrieving them across the bottom directly up the path of the flowing berley trail in a series of short, sharp, fluttery jerks. The success was instantaneous with hard strikes producing fat snapper cast after cast.

This continued to work until the current was running too fast and we lost touch with lures unable to either feel the bites or impart enough action to induce a strike. The success was buoying and warranted a second session to prove the point.

Scenario 1 again, with a twist

A week later and the planets aligned for another crack. The second session started and progressed much the same as the first but this time we were better prepared when the tide flowed too fast, switching off the lure bite.

I’d brought a selection of small bibbed lures specifically designed to swim down across the bottom when towed slowly by a boat or kayak. The theory was that casting and retrieving these lures back up the running tide would be very similar to towing them. And what do you know, it worked! I was soon catching a mixed bag of fish including snapper, kahawai and even a gurnard.

Now, we haven’t actually tried this technique but it has been kicked around the table as being a likely winner. The premise is based on those days when it’s flat calm and beautiful yet the work-up activity is limited or non-existent. These days are surprising common and enormously frustrating.

The plan is to head into area you know usually holds at least a few fish. Now mooch around around slowly with the sounder tuned to the bottom until you have found the area holding the most fish.
It doesn’t really matter if the sign is quite scattered because you are going to set a berley bomb hard on bottom attached to a rope and float. It will be important to weigh the berley bomb down or even attach a small kayak anchor to it to ensure it stays in one place.

Be generous with the berley bomb; you want to be confident it has enough substance to release plenty of juicy fish-attracting smells for at least a two-hour period. You are going to need to give the berley bomb some time to work, and it will, especially if you have timed its deployment for an expected bite time.

Once you have enjoyed a cup of tea for 10 minutes or so quietly work the boat up behind the berley bomb and start a lure-fishing with current and in the direction the berley should be flowing.

Don’t start the drift to close to the berley bomb. You don’t want to tangle your lures in it. You could also check the best drift direction by running the sounder but personally, when the fishing is tough, I prefer to keep sounder use to an absolute minimum.

Like I mentioned, we haven’t actually had the chance to experiment with this technique yet. Even so we are absolutely confident it will work. Hopefully there will be  a report with photos ready in the next edition of the magazine.

As a keen, but lazy, kayak fisherman I have put plenty of time into fishing rocky coastlines – mostly to save excessive paddling time but also because it can a productive and very exciting way to fish.

Over the years I have enjoyed great success with softbaits and have long thought the style would suit micro-jigs well. Now, after a couple of sessions, I can say micro-jigs show promise and justify more experimentation to get the technique right.

The trick seems to be landing the jig in the clear spots of sand between the weed covered outcrops, letting the jig sink to the bottom and then retrieving in a series of looping jumps straight back towards the kayak.

For some reason microjigs seem to get caught in the weed more easily than softbaits. This is possibly because the hooks are finer and sharper, which also means micro-jigs have a better hook-up rate than softbaits. To combat this I have ordered some weedless hooks from BassPro.com. I look forward to seeing how well they work.