Being able to cast a bait so it lands exactly where you want for the current to take it down the edge of a rock face or into a gutter so it sinks close to the edge of the kelp sounds easy yet a few small things are critical to be able to do it every cast.

From the moment the bait is released when cast, each turn of mono as it comes off the top of the spool then out though the guides will generate friction which all affect the distance and accuracy of where the bait will land.

A full spool of mono will allow the line to peel off the spool and fly through the guides where as with a half filled spool the line catches on the top of the spool which in turn greatly increases the “line slap” on each of the guides.

This not only slows the line down a great deal but also effects the direction the bait will fly through the air.

Before casting ensure the bail arm roller is at the top of the spool (bail arms will typically move up and down as line is retrieved).

Then take the line on your finger and hold it at the base of the reel seat, now you are able to power cast and release the line when the rod tip is pointed at the target zone.

Once the bait is released the rod must remain still and in the same position to allow the line to run free through the guides with the least resistance.

The line weight you fish is a critical factor to your hook up rate when stray lining and for the following reasons I only stray line with 6 - 8 kg mono. The “lighter the line” the longer and more accurate the cast will be.

The real key though in hooking a fish is to be able to feel the fish pick up the bait without it being able to feel any line resistance or it will drop the bait. 6-8 kg mono being so much thinner in diameter than 10kg plus mono allows for this.

Every time the boat moves with the swell or swings with the wind it draws the line through the water creating a belly in the line between you and the bait.

The finer the diameter of the line, the lesser the drag, allowing you to be able to keep in touch with the bait.

Wind resistance is also a big factor but when you hold the rod down so that the tip is pointing where the line enters the water it is greatly reduces the wind resistance of the line from rod tip to the water.

By minimising any belly in the line this allows you to see any movement in the line but also feel  the smallest of bites.

To use this trace or that trace?

Personally I very seldom use a trace, the reason being that a hook tied directly to the line allows you to be in touch with the bait where as a trace and swivel adds that tiny bit of weight which is often just enough for the fish to detect.

Sure you run the risk of getting busted off by more big fish than you would do with a trace, but the up side is that lost fish have only a hook in their jaw which wont impede their feeding.

In kelp and rock strewn shallow water only a few meters deep playing a snapper that can easily take the line under or around rocks requires you to be totally focused on the tip of the rod as it is critical to keep pressure on the head of the fish.

When playing a fish watching the rod tip, keep it high when winding down on the fish.

Keep the tip rod under load and bent over, only lower while winding the rod some 15 degrees from the vertical as this keeps a constant pressure on the fish lifting the head which stops it from going under the rocks.

Knowing where and how the current is running around the submerged structure is critical for the placement of a bait to be in the berley trail itself.

Prior to going fishing half fill a bucket with salmon pellets and cover them with water. Once they have drawn up some water, mould a handful into a firm tight ball.

Toss one as far away as possible each side of the boat, when they hit the water the outer edges crumble while the rest will sink and break up.

This not only leaves an oil slick on the surface but in time oil from the dissolving remains will rise to the surface providing you with a clear picture of the current lines.

So many people are still of the thinking that you have to hide the hook in the bait so the fish don’t see it, the reality of it is that fish don’t see hooks.

Rigging baits so the barb of the hook is well exposed from the bait ensures when you strike the hook is instantly driven into the jaw. Also make sure to remove all small scales around te hook.

Always present the bait in the most natural way, don’t cut square baits rather taper them into a strip bait which replicates a small bait fish as there is nothing square that I know swimming around in the ocean.

The finer points required to become a better fisherman only come with time on water,  patience and perseverance while being constantly aware and focused on your surroundings all day long. Often it is best to fish on your own or with a liked minded mate to pick up these skills rather than just a day out fishing with a social group of people.

Jack mackerel are a tasty bait and are attractive to both fish and fishermen. Put one on your hook but keep a couple for an appetizer and you will understand why predators happily eat them. 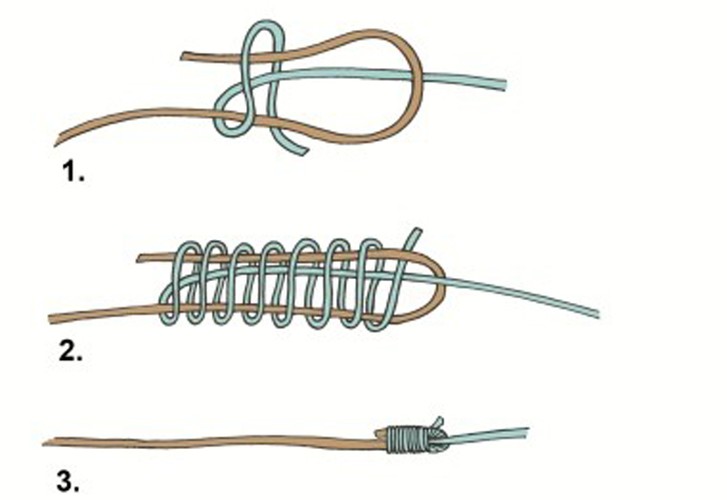 How to tie an Albright Knot

The Albright Knot is a good knot for joining a main line to a leader or two lines of different diameter. It's not as good or strong as an FG, but a great alternative and a go-to when you are at sea and need a solid joining knot in a hurry.
All Related