Tips and tricks to target snapper 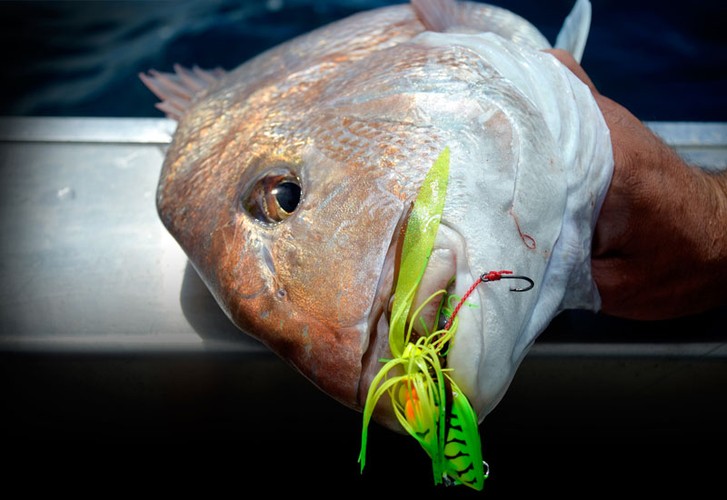 Snapper can be frustrating fish to chase, particularly when they are in spawning mode during spring. But there are some things the canny fisherman can do to increase the chances of bringing home a good fish. Snapper are our most popular sport and table fish.

They are the most hunted fish by the majority of fishermen and culturally speaking, have more kudos attached to their capture than most other non game species.

I don’t want to be unfair to our South Island fishing brothers, but I suspect that if snapper were a common catch from Bluff to the Sounds, the humble blue cod would be quickly overshadowed.

Trevally can fight harder, kahawai more spectacularly with full leaps and speedy runs, but snapper have a dogged and sometimes dirty fighting style that wins respect. If someone loses a fish after a strong run with a broken line, a large snapper is often blamed.

Snapper deserve their glory, even though the humble kahawai is also tasty when prepared fresh and the trevally just as nice as a sashimi dish. Snapper are an all round culinary delight either raw, cooked or smoked. They fight hard and with much cunning and can prove to be wilier than the fishermen trying to catch them.

My favourite time to target snapper is late summer and autumn. They seem to be closer to shore, bite more consistently and with less ‘mood swing’. Summer (with the exception of Christmas) can turn on some good action but spring time can be great or miserable.

Snapper are a top sport and table fish – targeted from the shore or boat.

It depends on what mood you find them in. I would best describe them as ‘hormonal’ almost like a teenager that hates life one hour and the next hour celebrates like there are only minutes left. Spawning does that to a fish.

Here are some tips and approaches to try if you find yourself turning up nothing and the frustration starts to build.

Try using your soft bait outfit with bait. This can be good if you are fishing from shore or a stationary boat. Soft baits work well when you are covering lots of ground in a thorough fashion as sooner or later you will happen upon an interested fish.

If conditions don’t allow for drifting then bait fishing with a light (3-4kg) soft bait outfit can give the advantage as nibbling fish are more easily detected and if you are fishing the rocks, it can withstand the harsh environment.

The light gear also packs greater punch for the fun and you will be surprised how far you can push it. I have a 4kg outfit that I abused in a fight with a sting ray. I would guess I squeezed almost 4kg of drag out of the rig during the tussle.

Light soft bait outfits are perfect for stray lining off the rocks or from a boat offering sensitivity, strength and lots of fun.

Another technique with this kind of outfit is to use a soft bait or small Grim Reaper lure under the berley trail when the maomao and small reef fish are tearing your baits to bits before snapper can get a chance to bite.

Often when the berley is dispensed, the maomao turn up but quickly become a blue plague nibbling to smithereens carefully presented baits. Kahawai are a valuable resource but like maomao can equally be a pain in the proverbial when trying to target snapper.

If you are fishing from the rocks, a weighted soft bait or bait with a little added weight can take your offerings down past the ravenous horde with a better chance of getting in front of a snapper.

Recently while doing a bit of spring fishing off the rocks my mate Matt and I were trying to fish down the berley trail to target the snapper that were sniffing around, while trying to avoid the kahawai.

The snapper were there but hanging low and sometimes right below our feet under the surge and white wash. Just when we presented a bait, a kahawai would zoom in and snatch it. It took a few goes and lots of patience to get a bait in the right place.

Matt scored the first nice snapper with some pilchard on a soft bait jig head, the weight sending it past the kahawai zone and in front of our red friend.

Change of light is often regarded as the best time of day to fish, and if you are not able to fish a location that has deep water and lots of good kelp beds or similar structure; fishing shallow can bring the best rewards in the evenings.

Change of light is generally considered to be one of the best times for snapper although it also means early starts.

For example, I know of at least two snapper over 8kg caught on the heavily populated East Coast Bays on Auckland’s North Shore this year by evening fishermen. I have heard of similar captures by boat fishermen anchored over night in sheltered and seemingly featureless and fishless bays that have yielded big snapper at night.

Evening trips can work well for Dads who can plan good family time during the day in holidays or weekends and then slip out when the kids are in bed to try for a night mooching snapper.

Another good time to fish in east coast locations is after a bit of rough easterly wind and swell. Murky water gives the snapper cover in daylight and the swell action uncovers food in the form of crustaceans and shellfish that snapper feed on.

One weekend up at Doubtless Bay I was passing time with my son on a bright and sunny winter day fishing a shallow rocky ledge. There had been four days of easterly swell, stirring up the coast and dislodging all kinds of tucker.

My son’s first cast resulted in a fat 2kg snapper. We caught prime conditioned snapper, trevally and kahawai and the next morning I scored a lovely 3.5kg snapper from my feet.

I have fished similar locations in summer but with no result as the conditions were calm and clear with little attraction or cover for the snapper to venture in close.

Get away from the crowds if possible and go for a hike – sometimes snapper will stake out a bit of territory and hang around there.

On our recent trip in the far north, it was late morning that the snapper came on the bite and again the next day the only snapper landed were mid morning and not at the change of light. The change of light can be good but it’s not the only time to target snapper.

A ledge with a decent drop-off with current and good habitat nearby can be attractive enough to hold snapper as well. It may take a tantalising trail of fishy smells and morsels to draw them close to your location and into the range of a well presented bait.

Someone once asked, ‘How much berley is enough?’ My reply was, ‘how much can you carry?’. On my last trip I carried 16kg of berley with me, on top of tackle and five fishing outfits. I must be possessed.

You can never have too much berley, the frozen sausage of bonito bought from tackle and bait shops is good and salmon pellets are also good. One trick I heard a fisherman share was to take a bottle of tuna oil, put a pin prick in the side and secure it to the boat or rocks. The oil gets released in a steady fashion to lure fish to your possie.

Another trick on the rocks to help make the berley last longer is to hang it half way up the rocks so that only half the wave catches it and releases berley. This reduces how fast berley is released but it still produces a fairly steady stream of attractant. You may have to keep adjusting the bag every half hour or so as the tide changes.

Snapper present a great challenge for the fisherman – off the rocks or from the boat. The changing seasons keep us on our toes and often challenge us to find new tricks to secure a feed.  Use your powers of observation and persevere. You will no doubt be rewarded for your efforts.