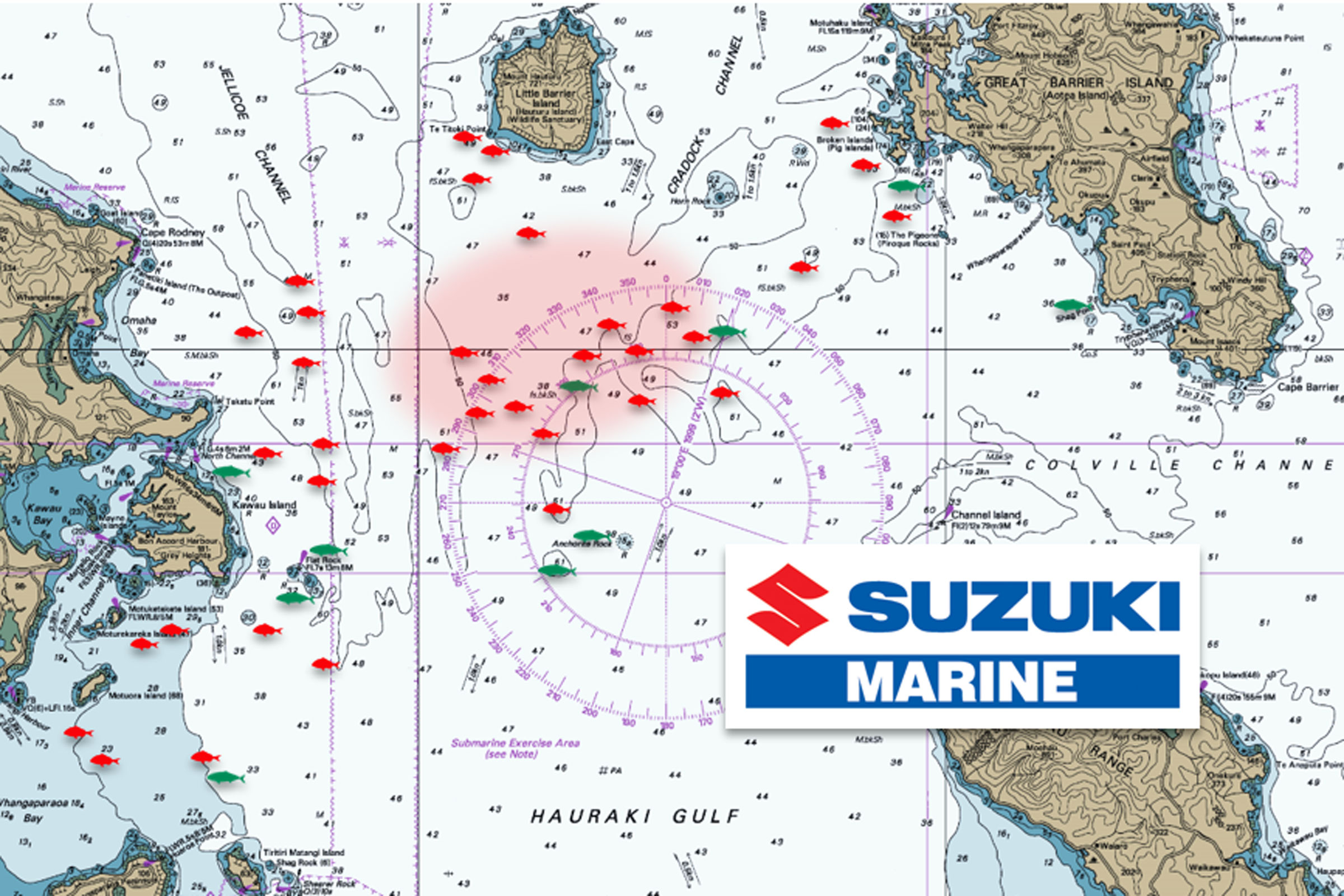 Great weather for ducks as the saying goes, however not so great for fishing the past several days with heavy rain and much moisture in the air, wind speeds of 50kts/90kph more the norm than the exception. in the Hauraki Gulf the fishing out further has been very rewarding at times, mainly out in 50m+. Drifting over the ‘squiggles’ is providing good consistent pannie snapper for the table, out past Little Barrier there’s been more workup action with snapper, kingfish and of course the odd shark ensuring your tax payments are right up to date.

Winter is a good time to target big trevally and john dory for the pan, and these great table fish can be a lot easier to catch than snapper in the gulf at times.  Trevs love the little Pocket Rocket micro jigs, and smaller soft baits, and john dory will readily grab a soft bait worked around foul ground and most of the reef structures in the gulf.

Worthwhile to head out to the western side of the Barriers recently.

In and around the islands of southern Kawau there are some good snapper holding, you may have to move around a little, some good snapper sign just says no, others are on the chew, usually only several hundred metres away, so have a nudge around and you should get onto the feeding snapper.

Fishing offshore pushed pause and the inshore areas have been challenging to say the least with lots of murky, silty waters and turbulence to continue the suspension of sand, seaweed and muddy run-off. Once the murk clears though…!!

Most of the country is experiencing the current feisty attitude of Mother Nature and her various fast-changing moods, although out off the rugged eastern Bay of Plenty coast there may be an early opportunity for the mighty Southern Bluefin tuna(?).

This area is not a place to be taken lightly for a day’s outing, it can be one of the most inhospitable and dangerous sea states around. If the stars and planets do align though it can also be one of the most productive and exciting fishing zones to be in – those Bluefin tuna can’t be far away, and the bottom fishing for huge ‘Puka, Bass is legendary.

Of course, battling with almost unstoppable kingfish is ‘common’. With the likely prospect of truly big fish real preparation is an absolute must, not just the boat and safety gear, but the tackle you choose to use as well, generally speaking light tackle is not the go!

Successful charter operator Captain Aaron Sargent at Coastal Fishing Charters sure knows his stuff with results that are simply outstanding and speak for themselves, using the rod/reel combos aboard like the Catch JGX5000 on ProSeries Acidwrap 400 are the go-to, serious tackle for landing seriously big fish with the Giant Squidwings being a consistent big fish catcher.

BTW there’s a new Catch gimbal just out (which has both a pinned and non-pinned attachment!), perfect for this sort of fishing when hook-ups are usually brutal. Equipment made for the task is absolutely essential, there’s no room for a moments error or your fish of a lifetime simply laughs and leaves you wondering what happened in the blink of a fish-eye.

Landing these gigantic fish will be imprinted on your memory forever, there is nothing like it.