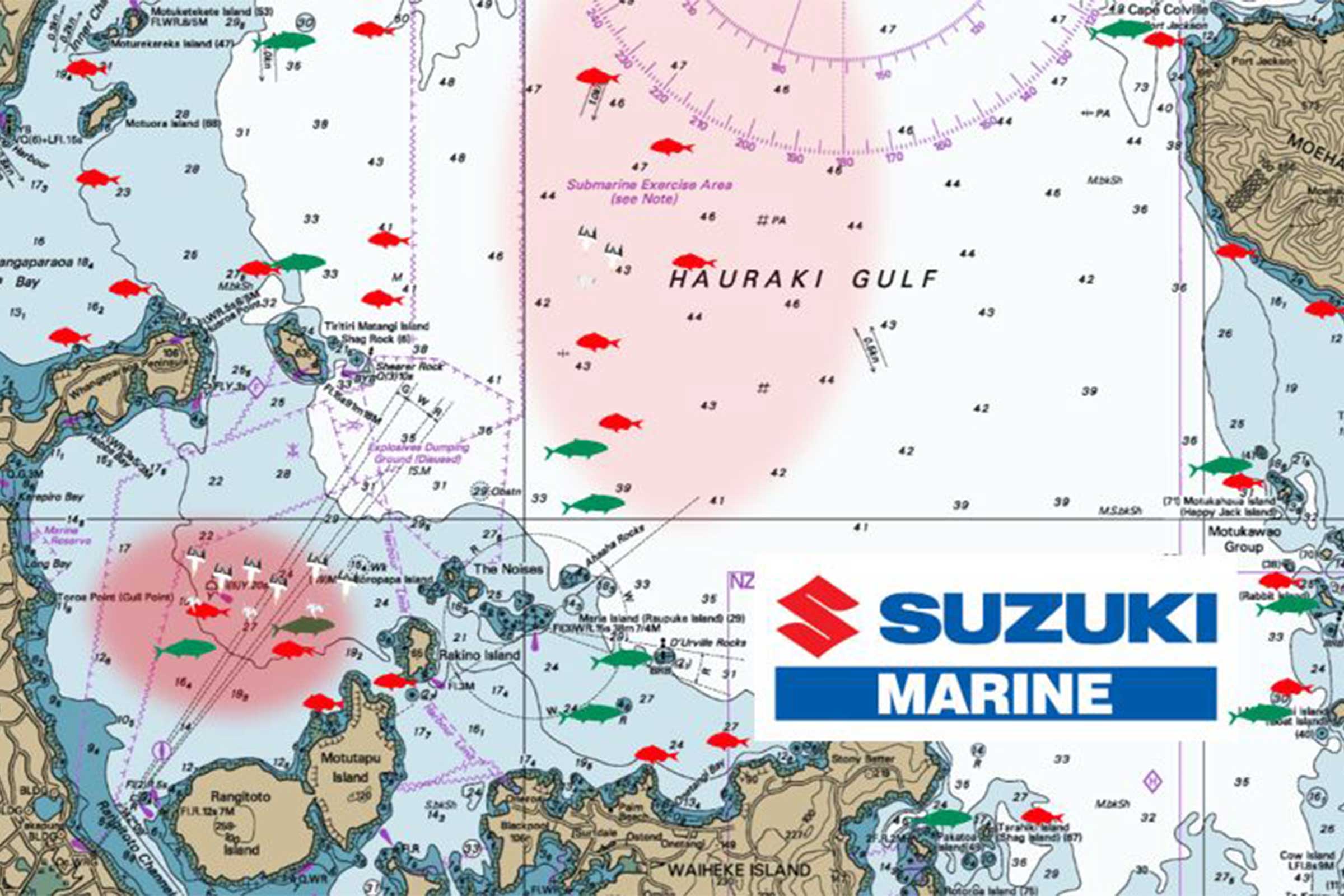 With everything wind-wise from variable (yes there were several minutes of this!) to thumping Sou’westers, predictions of 20-30kts quickly turn to nudging 50kts in the outer gulf lately. Not the place to be fishing at the time, but times for fishing there have been and many more are to come. Snow falls in summer this week down South and even snapper caught in Otago on the Lil’ Squidwings no less! Global warming? Out over the open areas of the Gulf, the sea life continues about their ways, no matter what hits our computer headlines, and surprisingly, good snapper are there to be caught over the general ‘paddocks’ for the first time in a while now.

The 40-50m depth drift fishing has turned up some good schools of snapper, and not necessarily under any real surface sign. By real surface sign I mean gannets, dolphins whether active or passively milling around between bouts.

As you motor along or scan around the boat visually take note of the surface life, lots and lots of terns and petrels flying around chasing each other with purposeful flying – could be the food chain party starters, so it’s worth a drop of a prospective lure (the genuine Freestyle Kabura is the No.1 choice for this).

Note what the sounder says, what is it telling you? Perhaps mid water blotches, potential bait…and what’s on the bottom? Anything? Often some small surface activity can point the way for a whale of a time fishing.

Take time to ascertain what’s going on, after all it is a loosely linked food chain all of the time out there. Sounder sign at all – drop that perfect little prospector lure.

Shallower areas of the gulf and harbours are fortunately doing quite well, the general wind speeds have meant forays wider have been limited.

The numbers of skis and kayaks now getting onto surprisingly good fish in the sheltered inner areas, when the rest of us sit and just computer fish – ‘cos it’s too windy!’ – well yes out in the wind, but what about in the lee? Lots of choices. Fun and productive especially this time of year, and a new area provides the added adventure factor.

There have still been some thumping, nerve-tingling workups halfway between the North Shore Bays and Rakino the past few days for instance, a couple were huge, others more fleeting, but a wonderful sight so close to the city. Great place for kahawai, gurnard and snapper.

There are now both east and west coast tuna (YFT, albacore and skipjack), striped marlin, black marlin (a massive one caught this week in BOI), YFT caught back of Gt Barrier – how about a day trip possible on the right day from Auckland?!

The full moon is bright and cheerful with the tidal flow increasing rapidly over the next few days (watch the wind against tide scenario, it’ll get choppy) and there’s the usual day or two over the full moon of calmer winds, great news for those chasing tuna.

With the outgoing tide predominating the weekend’s fishing time there should be some excellent fishing sessions.

Inner channels first thing in the morning just before high tide flicking a softbait around? Out over ‘worm beds’ between Rangitoto and Whangaparaoa Peninsula with an eye out for a workup? Heading out into the mid gulf to look for a thumper of a workup east of the cable zone east of Flat rock, or go little further and just drift for an hour or two and pick up all sorts of varieties of fish?

The choices are many, and they are all yours 😊

For Wave Dancer Charters: Visit www.wavedancer.co.nz to make a booking.