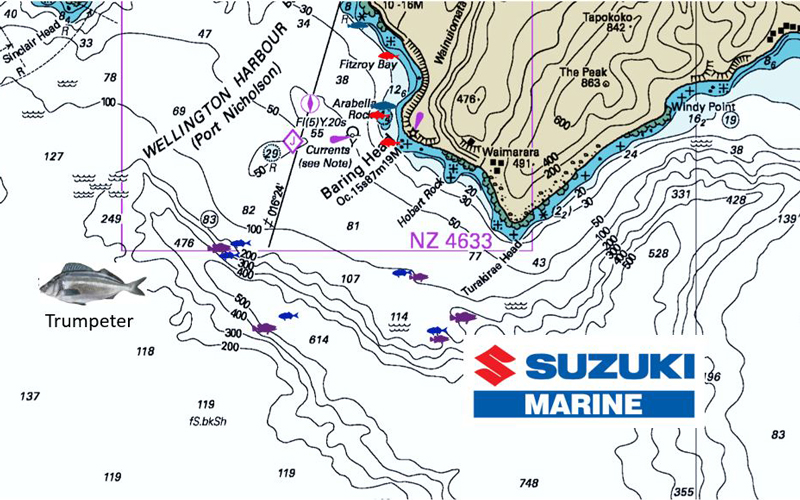 There’s big bluenose action out at the trench at the moment. These stalwarts of the deep are always a great catch for the table and we’ve seen some good numbers of nice fish getting caught if you can get the weather and the time off to cooperate with each other.

Bluenose often hang out up off the bottom a bit, so if you see sign sitting up higher than you might expect for puka then it can often be bluenose.  This time of year we expect they will be there for a while so it’s a matter of keeping an eye on the conditions and being ready to go.

Snapper and kingies have come on a bit but at this early stage of summer they are not exactly raging just yet.

Mana and Pukerua Bay are producing good fish but not yet in the big numbers we expect closer to Christmas.

We are now starting to see the south end of Kapiti fishing well too.  It’s been a bit quiet there to date, but good to see some fresh action at one of our better fishing locations. Here you can get good terakihi off the southern contour changes and reefy pins, and off Pinnacle Rock (see map), and also trevally and the odd decent snapper.

With strong north-west winds forecast the weekend looks a bit average for boaties everywhere but close in to the south and east coast.  There’s no swell there at the moment though, and nice clear water so perfect for surf casting and shallower diving missions.

Launching off Owhiro Bay and staying in really close watching out for the marine reserve could be an option, and it shouldn’t take too long to pick up some nice blue cod and terakihi at least.

Five Mile reef is still good for big cod and terakihi in 50 – 75 metres if you fish the turn of tides when there’s not too much current running.

The weather might be a bit uncooperative this week, but when you can get out Sinclair Head to Karori Rock, and out deeper around 80-100 metres there’s a good chance of catching Hapuka and trumpeter.

Trumpeter are a fantastic fish, and they have been appearing in a few spots lately.

Normally they are more of an east coast fish, but we’re seeing them more south now. There’s a good bank out past, and to the south of Nicholson’s Trench where some really nice specimens have been landed.  It’s a huge area between 100 – 150 metres that gives you plenty of options to cruise about with the sounder and pick up sign.

Being at least 10 miles offshore it’s a bit further to travel, but as such, has not had the angling pressure and can therefore produce unexpected results.

Trumpeter are a fantastic looking fish, a bit like a big moki with distinctive horizontal stripes.  They can grow pretty big, up to 25kgs, and they are a great fight and will scrap like a kingfish all the way to the surface.

They make great eating so are a good reward for the effort.

Trumpeter are usually caught on normal puka gear, but have much smaller mouths than the groper family so a smaller sized hook is better.

Out west looks pretty unfishable in the short term, but those that have been able to fish Hunters are being rewarded with some really nice kingfish.  These are mainly on jigs, but of course livies also work well, often a big live bait being responsible for hooking the bigger fish.

South-west of Hunters we hear the 78 metre rise is fishing well for kings.  It’s primarily a well-known puka spot but being a rise with a bit of current running the kings are there too.

Where they have been catching gurnard the surfcasting crew are now steadily picking up a few snapper in the harbour now at places like Evan’s Bay. Greta point has been good but inconsistent, and it’s supposed to be a good time to be moki fishing at White Rock (even though the surfcasting club did not do so well off Wainui last week).

In case you missed it here’s a bit more detail regarding all the top surfcasting spots around the Wellington region.