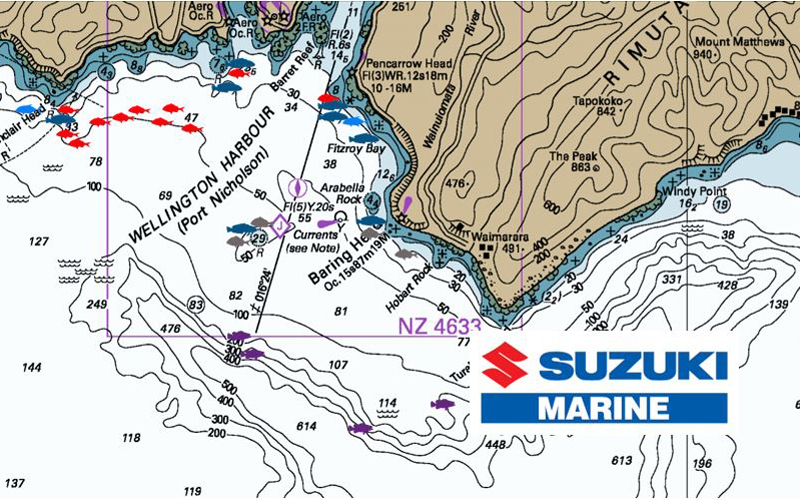 It’s spawning time for the snapper between now and early in the new year so they will be moving in closer to do their thing. Many people don’t realise the snapper move in, and when you can find them they tend to feed voraciously and can be quite easy to catch.

Off the south coast we have reports from several charter operators catching snapper off Island Bay.

It’s spawning time for the snapper between now and early in the new year so they will be moving in closer to do their thing.  Many people don’t realise the snapper move in, and when you can find them they tend to feed voraciously and can be quite easy to catch.

This is a good opportunity to get them on lures, which are very effective.  In particular, kabura style jigs, slow pitch jigs and Inchiku patterns are very effective out past the 40 metre mark, with soft baits and micro jigs being better in close right up to the weed line.

We are seeing more snapper than in the past herding up out here before they move into the harbour to spawn, usually around November, which is a very welcome addition to things for us fishos.  Around then you can expect to target them off the airport reefs.

If you do manage to get a really good fish and are tossing up whether to keep or return it, check the chin.  If it’s white you likely have a big breeding female, and if it has a grey smudge it’s a boy.  Over to your discretion on keeping or not, but the pannies definitely make better table fare.

If you are fishing off Island Bay, be aware to keep outside the marine reserve markers (see map).  The snapper population tends to move around a bit, so it’s a matter of locating them or bringing them in with a good berley trail.

Fitzroy bay is going well lately, producing good catches of terakihi, blue cod and gurnard with a few trevs thrown in for good measure.  Best in a North-East wind this bay has a wide open sand bottom with a few good patches of scattered reef that hold good fish.  Anchoring up and berleying will often bring the fish on, and stray lining or dropper rigs work well.  If you’re drifting, use a chute to slow the drift and get some soft baits or micro jigs down.  Trevally love micro jigs and the new tungsten ones from Catch Fishing are deadly on pretty much everything except terakihi.

Out a bit further Five Mile reef is good for big cod and terakihi in 50 – 75 metres if you fish the turn of tides when there’s not too much current running.

The best snapper and kingfish have been caught on the northern end of Kapiti recently.

Hunters was full of terakihi last time we were there, with some big trevs and blue cod.

Kabura (slider type) jigs have been doing the damage on the snapper and kingis. Use the 150 gram versions if there’s a bit of heavy current running.  If there’s a lot of foul the small kabura hooks can be a bit touchy to put pressure on, so perhaps try some slow pitch jigs or inchikus that have a gruntier twin hook rig.

We eagerly await the warmer water and more consistent snapper fishing around Mana, Pukerua Bay and down to Makara. At the moment it’s a bit hit and miss.

I’ve heard of some good trumpeter and hapuka on some of the seamounts south of Nicholson’s recently. That’s a place worth some serious investigation as it hasn’t been fished much by recreational anglers.

Best rigs are droppers with smaller (3/0) but solid recurve hooks.  These rigs are easily capable of handling good puka.  Come and see us in store for a bit more detail on all that.

Small bluenose are still biting well off Wainui in 120-180mtrs

There are good gurnard and kahawai around Ward Island with the odd elephant fish and trevally.

Evans Bay is still full of gurnard as well as Point Jerningham, Halswell and Seatoun.

One or two snapper getting caught off Point Gordon and some nice teri’s there too.

The big gurnard run is slowing down a bit as expected, so they are not quite as reliable as they have been, no doubt at the tail end of their spawning.

Greta point has been rampant one day and barren the next for gurnard. Some anglers have been getting good results slide-baiting Oriental Bay and moki fishing at White Rock.

It’s perfect timing for those places to start producing a few nice fish, so if the weather gives us a break anytime soon it’s well worth getting out there.

With typical spring winds being pretty merciless for boaties, the windows are small and you have to grab the opportunity where you can.  This long weekend there might be a bit of a chance on Saturday with northerlies predominating, but she’s pretty blowey for most of the next several days.