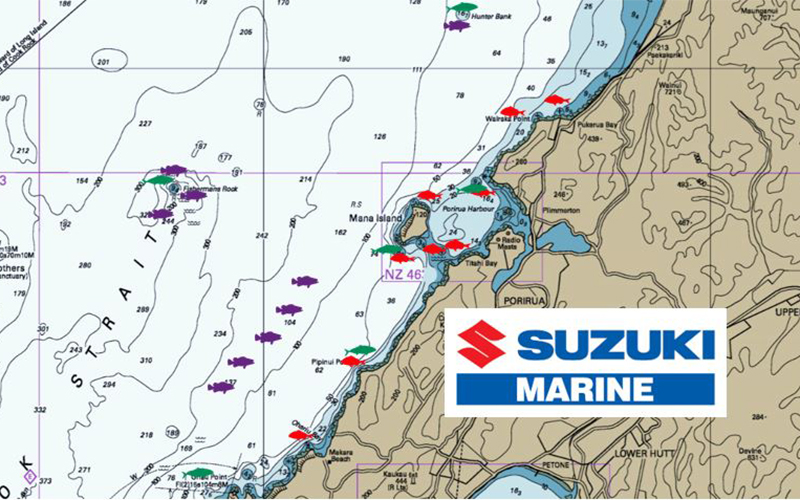 Despite some howling winds, there are a lot of positives to be taken out of this week when it comes to the fishing. Before the big blow we had some good action, and there is likely more to come in the next week or so. Hapuka are back on the chew and some good numbers have been taken from both out west and south out in the Trench, so it looks to be gearing up already for a bumper season if we are lucky.

You don’t have to travel too far for puka at the moment.  We had some great fishing straight out from Makara, fishing the big shelf that drops off from around 130 –150 metres.  This is a big drop off and you can find puka all the way along it at the moment. I’d say this is the closest puka spot to land in Wellington that is a consistent producer of fish.  We didn’t fish this drop last season, but trying it again last week was surprised at how well it was going.  It just shows that you don’t necessarily need to go all the way to Fisherman’s or Ohau to get good Hapuka action.

We also caught some big terakihi, gemfish and a few tope out off this area so all on board returned home pretty happy.

Of course puka are a big fish and getting one or two on board is usually all you need.  If you limit what you take and then move back in shore to target snapper, cod or other species that keeps the puka population healthy for next time.

We only run several puka trips per season, but if you are keen on targeting this species best get in contact as we are booking out available spaces between now and the end of January pretty quickly.

The moki comp we talked about last week, out at Ngawi, was fished in near perfect conditions and we saw some really good results, with around 300 rods out, and 22 moki weighed in.  Undoubtedly many more were caught and not weighed, possibly as many as 70 – 100 we estimate.  My mate, for example, caught seven fish but only weighed in the two biggest.

Winning fish was just under 5 kilo’s.  A lovely moki.

Cape Palliser is such an awesome spot if you care to make the journey and have an explore.  There were people out there climbing into the water and gathering crayfish, not something you can do in very many places nowadays.  The fishing is awesome from land and by boat,so when the weather allows perhaps get over there and check it out for yourself.

So after that, we had some crazy winds this week, with Wellington making the news again for it’s famous, as yet un-named, wind.  The good news was that this wind was from the north-west, which blows up a storm but generally brings in warmer water, and this, plus all the stirring up of the ecosystem can often mean a really bumper fishing time to follow, especially for snapper.

From what we can tell, the temp of the water has come up in shallow at least, and the results could bode very well for fishing right up the west coast.  Usually you’ll find awesome snapper and kingy action gets pushed in nice and close, and areas like Pukerua Bay, Makara, and the southern coasts of Mana and Kapiti even, could really fire up.

If you can get a day off mid-week, from Monday night to Weds morning looks like a fantastic window, and we are looking very forward to getting out there ourselves.

It might also be a good opportunity to give the Trench a go,as we had reports of some very good bluenose fishing last Saturday, one boat landing 24 fish for their efforts.  There are a lot of smaller fish about, but a bit further, the far side of the Trench in around the 250 metre mark, seemed to produce bigger specimens.

The terakihi have been a bit thin on the ground lately, orat least they have been noticeably harder to catch, however the blue cod are making up for it, turning up in a few places we don’t normally expect to be catching them.

After this big blow we might see the south coast start turning up the great fishing for both these species that we are used to though.

The inner harbour is still fishing well with plenty of gurnard, and the surf casters are regularly catching snapper now.

Snapper will be moving in to Evan’s Bay, and then usually move in around Eastbourne if they follow the traditional pattern.

Out west Pukerua Bay in around 40 – 60 metres, The Bridge,and south of Mana should be producing good snapper now, so let’s hope we are proved right out there in the coming weeks.