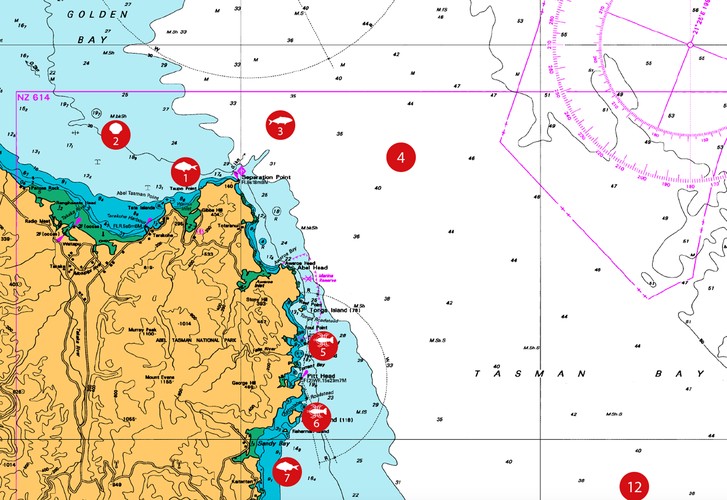 Try around the mussel farms for a hungry snapper. Patient popper fisherman are likely to find a kingfish.

A short motor out into the bay puts you on the local scallop beds where a limit of 50 per day, per person can be harvested. Snapper and gurnard roam the beds as well.

Work the reef running east of the point for blue cod. Closer in to Separation Point the current holds kingfish around the headland.

Albacore tuna are caught out in this area during the summer months.

Bark Bay reef can be fished and dived with some great crayfish and blue cod to be taken. Snapper can be caught
over summer.

Hapuka Reef and Six Foot Rock on the northern end of Adele Island are good places to throw a line and also look for a crayfish. An evening tide and live baits drifted back onto the reef should produce results.

Land-based enthusiasts should try Kaka Point at the north end of the beach for a night fish, or the headland between Little Kaiteri and Stephens Bay. Mussel farms out from the Motueka river hold kingfish and snapper in summer. Stickbaits, jiggers (depth is between 17 and 25 meters) and spearos should all get results.

Tides around 9am and 9pm are best. Use plenty of pilchard and bonito berley and strayline a half pilchard. Turn off all electronics and keep noise to a minimum as the water is shallow and the fish spook easy.

This one of the few places in the world you can take a car’s windscreen out while casting your line. It’s not uncommon to have 30 anglers lined up in several different areas along Rocks Road all vying for a chance to land the big one.

The 11km long Boulder Bank is the place to try trolling for kingfish. Around the radio mast there are good spots for the spearos to have a go at kings, snapper and squid at the right time of the year.

This areas hold blue cod, gurnard, terakihi and snapper in big numbers
most of the year.

Like Pepin Island - plus albacore tuna straight out in front of Okiwi Bay on the 40m.

Jigging works well in summer. It is well worth putting a livebait on the bottom for a hapuka.

Numerous spots to catch a blue cod dinner. Ledger rigs seem to work best on the snapper in summer.

Plenty of bigger blue cod to be caught when the weather allows access to this area.