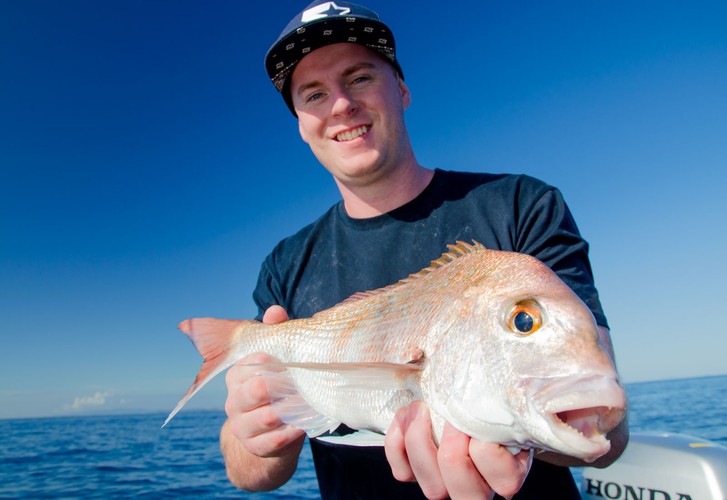 Keen fisherman Tom Black takes a trip with Captain Cam Allen and Grant Bittle to see how the experts fish the Hauraki Gulf. Like a lot of Auckland based fishos, every week I watch Grant Bittle’s Hauraki Gulf video fishing reports with joy and a little jealousy. This week I was lucky enough to head out onboard Wave Dancer with him and captain Cam Allen to see how he does it.

The day started well as we struck gold with the weather, literally, the rising Autumn sun had all of Auckland's buildings and skyline illuminated with a vivid golden tint.

Grant warns that snapper have been off the bite the last week, and I should keep my fishing horizons open. There’s been a unbelievable amount of skipjack all around the inner gulf that should keep us more than occupied for the morning.

It doesn't take long to get out of the Waitamata Harbour

I don’t think I’ve ever come across anyone as enthusiastic about fishing as Grant. “This really is paradise we live in here. I travel a lot, and if I’m away from the Gulf for too long I start getting restless. There aren’t many places in the world where you can be a city the size of Auckland one minute and be out in one of the best fishing grounds in the world the next” Grant tells me as pass the Devonport Naval Base.

“You always see guys at the boat ramp with big frowns on their faces like the entire world’s against them just because they didn’t catch any snapper. It doesn’t matter to them that they caught a bucket full of kahawai throughout the day. Fishing should always be fun, if it’s not, then why do it?”.

Cam's two 225 HP Honda's have us wizzing past Rangitoto and Waiheke in no time at all. Wave Dancer are sporting three boats, two of which are brand new 8.5 and 9.5 metre Extremes. Cam's Extreme 850 Centre Console is a pretty deadly looking bit of kit, and wouldn't look too out of place if it had John Rambo with and M60 on the back.

Easy to spot, not so easy to photograph. Skip jack have been in the Hauraki Gulf in massive numbers this Autumn

Not just a great bait, skipjack are an immensely fun fish to catch. Grant has been catching them lately from the northern end of Waiheke right up to Kawau Island. “On days like this the best way to find them is to see them”, Grant explains.

Almost on cue we see a small splash ahead of us as a school of skippies zoom past. It’s time to start trolling. Cam slows down to between five and seven knots and Grant hangs two lines off the back at varying lengths. Grant likes to change up the lengths and see what the fish are preferring.

Grant setting his lines for a troll

It isn’t long before before the line starts to scream. Skipjack are beautifully designed and can run all day, that’s what makes them so fun. There are a few things to watch out for though. Skippies have notoriously soft mouths so go soft on with the drag, and always use a net.

Skipjack are a fun fish to catch, and a beautiful fish to look at

After all of Grant’s talk of "no snapper" and the beauty of catching other species, Cam spots some very snapperish looking noise on the Furuno TZT.

Grant hooked on to another skipjack, North of Waiheke

It doesn’t take long before we get out first hook up. it seems there is plenty of snapper out here after all. Grant has me using his own personal custom Jigging Master rigged with a new product from Catch called Squid Wings. “This is for when you want to upsize your catch” Grant explains.

I’m unsure quite how to use the new lure at first, but after some quick tutoring from Grant I start to get some bites and the pannies start coming in.

Where’s the camera when you need it

Cam hooked on to the one that would get away

On the other side of the boat, Cam lets out a shout “this is a good snapper”. Judging from the bend in his rod he wasn't wrong.

Then without warning there's an almighty splash just 50m from the boat and Cam’s line went completely slack. “Farr out, that’s the biggest shark I’ve ever seen!” Cam let’s out. “Had to be a great white”.

Regardless of what stole Cam’s snapper the fish keep biting. We are even visited by a school of kingfish right up the boat.

The author with a nice pannie for the bin

Grant with one of the snapper that were "off the bite"

By 10am the tide had just about reached its peak and the bite had all but ceased. With more than enough to feed the family and most of the neighbors we decide to head back home.

What a morning; sun, calm seas, dolphins, sharks, skipjack and snapper; and back in the office by lunchtime. Cam and Grant from Wave Dancer have been awesome.

Conditions on the Gulf could not have been better

Something I didn’t completely realise before heading out with Cam and Grant, is that charters like Wave Dancer aren’t just for fishermen without boats like myself. In fact, as Grant tells me, a large proportion of their clients are keen boat owning fishermen who want to come out and pick up some tips and learn a few things. If you fish the Hauraki Gulf and this is your intention, then I couldn’t recommend Wave Dancer enough.

Heading out from Pier 21 is a great central location meaning you can head out and get back with ease and no need for long drive home with your catch in the back. Also the speed and range of Wave Dancer’s fleet means there’s isn’t really anything or anywhere you can’t head in the Gulf.