Manukau - A harbour for all seasons 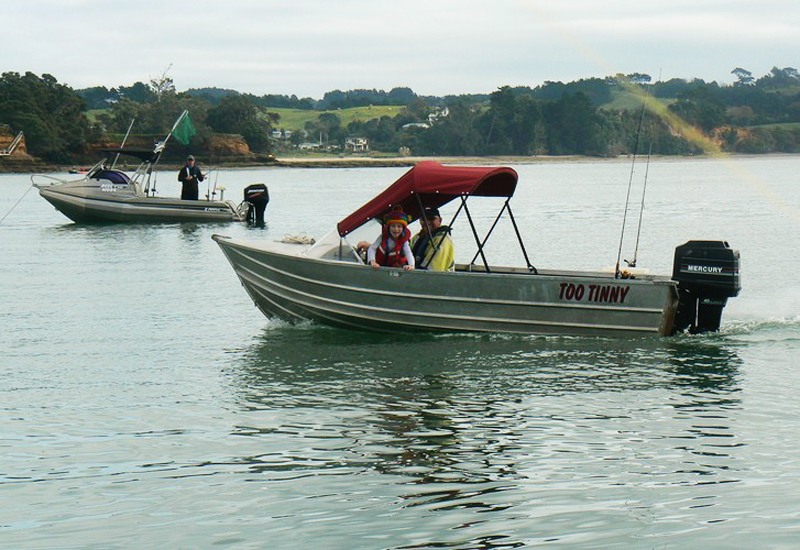 Many are quick to dismiss Auckland’s West Coast and the Manukau Harbour but, as Mike Parker explains, there’s hot action to be found. Most fishers opt for the warmer months to go fishing and spring is when many start to think about fishing again.

It’s easy to get lured into thinking that the first sunny day of spring will be just like the summer that disappeared six months earlier.

Many say that snapper will go on the bite when the water temperature hits 18 degrees. You can believe that if you want but I’m more inclined to think that they will start eating when they are hungry.

There is no doubt that fish are cold-blooded creatures and their metabolism is highly reliant on their surrounds. Some fish thrive in cold water and it doesn’t affect their appetite one little bit. Some fish, such as kahawai, are prolific all year round here out west of Auckland.

Snapper slow down as the water cools, which is why they feed so hard in the autumn months, putting on condition for the winter when they eat less and use less energy.

Big gurnard are a manukau staple.

As the water warms they need more food to fuel themselves and that will happen sometime in September. While 18 degrees may well trigger them to start spawning, snapper do get very hungry once water temperatures start to warm and they feel the need to put on condition before spawning.

Where will they be and how do you catch them?

For the West Coast, you will find snapper in depths of 55 to 60m. Simply drop your anchor, put down a dropper rig with two 7/0 recurve hooks loaded with mullet for bait and wait.

You may catch sharks, you may catch kahawai but you may also catch some of the best snapper the country has to offer. The almost constant presence of large tope and kahawai on the West Coast means that heavy tackle will cause you less headaches from tangles and a hefty 10oz sinker will help too.

My line weight would typically be 10 to 15kg mono and the trace 60lb mono. An inchiku jig baited with a small piece of squid and cast out the back and left in the rodholder is a great way to increase your gurnard catch.

Generally, due south of the Manukau entrance is the place to be. There’s no specific spots out here but south of the bar is where it’s at. Piha and Muriwai fish every bit as well with the area immediately behind the bar generally less productive in the spring months.

It’s a long way out to the 60m mark so you may choose to fish in closer. By all means try it, as every year someone finds some good fish in close, sometimes as close as 10m directly south on the harbour entrance. I choose to go out deep to 60m and then work my way in if I can’t find the fish.

The west coast can be a cruel part of the ocean and your trips out there will be weather dependant. Nobody likes getting bashed around when they go fishing so only venture out when the swells are small. It needs to be a good day to go out if there is a metre-and-a-half of swell coming through.

While the coast is acknowledged as a great fishery, the Manukau Harbour doesn’t get the same sort of glowing reports. Scorned by many as a snapper nursery, it also has a lot to offer. I have spent much more time fishing the harbour than I have the west coast and I have to say the harbour has been very kind to me over the years.

Many fishermen don’t have the means nor the desire to tackle the potentially big and dangerous seas on the West Coast and prefer to spend their time in New Zealand’s second biggest harbour.

Ask most Aucklanders and they will write the harbour off as dangerous, especially when the wind opposes the tide, with catches consisting of only undersized snapper, sharks and stingrays.

But the harbour can be remarkably calm, with some excellent catches of top quality table fish. Scallops are another option when in season and are in their prime in spring. Snapper, gurnard, trevally, kahawai, flounder and even kingfish can be caught in good numbers but it is also true to say that undersized snapper can make fishing very frustrating at this time of year.

The harbour requires a different approach to the coast, mostly because of the huge tides and the large amount of real estate that appears every low tide. Early morning straylining sessions, casting close to exposed banks on a flooding tide can be very productive for snapper and trevally.

Other successful areas are the numerous gutters that run off the main channels and the convergence where channels meet and once again anywhere there is a change in the contour of the bottom, sometimes even in water only two-metres deep.

In the last few years the harbour snapper hotspots have been in the South Channel under the lighthouse and almost as far away from there as you can get, down towards the Airport and Clark’s Creek areas.

Rise to the spring challenge

Spring is here and while the fishing can be challenging for a number of reasons, with a little thought and a lot of adventure some great fishing can be had right on Auckland’s doorstep. As I always said to my kids on the hard days, if fishing was always easy then we would get bored with it.

It’s that challenge that keeps us coming back time and again.