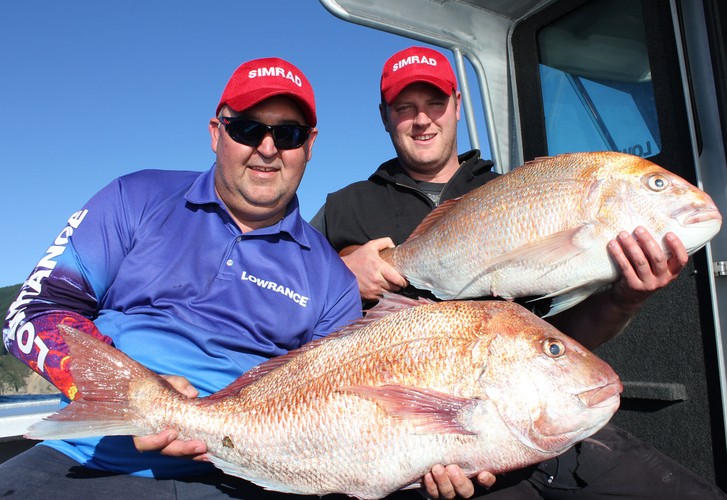 Sun, Sand, Sea and Snapper, your Nelson holiday destination has it all.

At the top of the South Island, where the rolling mountains flow down to the golden sand beaches and turquoise waters of Tasman Bay, lies the small city of Nelson. Nelson is the biggest commercial fishing port in Australasia. Fleets of massive fishing trawlers up to 300ft long base themselves because of the excellent industrial infrastructure needed to keep them running year round. In its heyday Nelson was also a mecca for inshore fishing boats with huge schools of snapper, plentiful scallop beds and a booming industry.

Rocks Road, the main route north into the city, follows the edge of the harbour up to Port Nelson and past into the Haven. As a kid, I used to fish off the road on those long summer nights and catch plentiful snapper. Fishing here, in sight of Tahunanui beach, was one of the few places on earth you could fish out of a car window on a main highway.

This monster snapper was caught in just ten metres of water

Those childhood experiences got me addicted to fishing. As I grew up I made a point of fishing everywhere I travelled. Nothing ever lived up to those memories.

My passion for fishing carried on following a move to Motueka. There was an introduction to kingfish, which used to feed on the huge schools of yellow eyed mullet and garfish around the wharf. This led me to the commercial fishing industry so I have seen plenty of snapper in my time.

The demise of the Tasman Bay snapper fishery in the late 70s briefly stalled with a small revival in the late 80s and early 90s, only for to drop off again in the late 90s.

It was these hard times that got a young man thinking about how to attract these fish when there were so few around. I can remember all kinds of cunning schemes that were hatched over the years; some worked, others didn’t. We built up knowledge about targeting these fish and how to alter fishing gear to suit conditions - the time of the year they turn up, where to target them etc.

Although all the knowledge gained did help it was still very hard to consistently catch a feed of snapper and the recovery of the fishery really didn’t start to kick in until some 30 years later, around 2007.

And then the sun came out again

The first sign of decent snapper back in Tasman Bay got the juices flowing again and although most of the fish were smaller the “snapper fever” returned with vengence.

Just like before, there were good bites, slow bites and skunked out disaster bites where nothing getting caught. It was around this time the longlines started to make a reappearance in the bay and it was quickly noted that a 25 hook longline caught considerably more fish than someone fishing with a rod and reel in the same area.

Among my good mates we trialed all sorts of strange rigs in all kinds of different configurations, but with limited success. The times had changed so that now you could go out and get a decent feed on the right day when everything was working and the stars lined up. But it was and still is a little hit-and-miss; a story that I believe is true right around New Zealand.

Keeping track of when and where fish are caught over the years is one of the key tricks of consistent success. You must also keep track of water temperature and water depth as this plays an important role in where the fish will be  holding.

Paul Maskel with a couple of horse snapper

In Nelson, we have learned the snapper turn up a lot earlier than most people think and head in to the very shallow waters in early Spring. As the water temperature rises, more fish move in to join the scouts. At around 17 degrees the fish start accumulating in large schools and hang out around the eight to 15 metre mark to spawn.

As the water temperature continues to rise we have noticed the snapper move out deeper and seem to like hanging around in that 17 to 19 degree water. This is where it’s best to target them later in the season as they have finished spawning and get a renewed vigour to feed.

For locals, it’s common knowledge that the big fish are at the 30 metre mark, this is normally where the water temperature break occurs in Tasman Bay. It’s also where the local currents seem to be stronger and the shellfish beds are located. All this just smells of big snapper and that is exactly where they are when all the conditions line up.

The gear to hook a horse

The deeper water and stronger currents make it a little hard to stray line un-weighted out the back of the boat so we use only enough weight to get it down into the hit zone. The hit zone doesn’t have to be on the bottom, as we have observed a lot of fish getting hooked well off the bottom. A good main line in the 15lb to 20lb class with a leader of 30-40lb works well. I always use a keeper hook around 4/0 with a main of 6/0 if fishing pilchards, which is one of my go-to baits.

The rod and reel setup is just as important and a big change from 30 years ago when a broom stick with 200lb cord on it was the normal. Today you might steal your kid’s whippy little rod and put a cotton reel on it. Shimano produces an awesome 4000 bait runner and matching that with a Catana Nano in the 6-8kg range gives you a set that will stop just about any horse snapper. I won’t go into the braid verses mono debate apart from saying “use what you catch fish on”. But I will say if you are using braid as main line we have found very long leaders around 5 to 7 metres produce more fish than a short 1 metre one.

We use a lot of berley with a dispenser pot on each side of the boat set at different heights in the water column. These pots are assigned to one of the lads to look after, which means giving them a shake every 5 minutes and keeping them topped up.

The downside of having lots of berley in the water is that Tasman Bay must be the world’s biggest shark breeding area – they show up in massive numbers the moment you set yourself up for a snapper session and get the berley flowing. If you persevere you will get a bait to the snapper but sometimes it can be very testing getting  a leader-destroying shark after shark.

It's 2016 now and I must say the amount of snapper and size of fish is incredible, considering what it was
like only 10 years ago. It’s boom time for recreational anglers around the Nelson district with most local anglers bagging out with ease and the others still managing to get a feed most of
the time.

The rise in the use of setlines has become a worry as many people, like myself, often just want to get their first feed of snapper on the table at the start of a new season. But when the fish start to come on the bite more and more, that’s the time to start looking at other more conventional ways of fishing.

I understand those people that don’t get out much and just want to nail a feed for the family, which is everyone’s right but I would encourage those nailing massive snapper to think about sliding those ones back over the side if they are in good releasing condition and you have plenty of other fish.