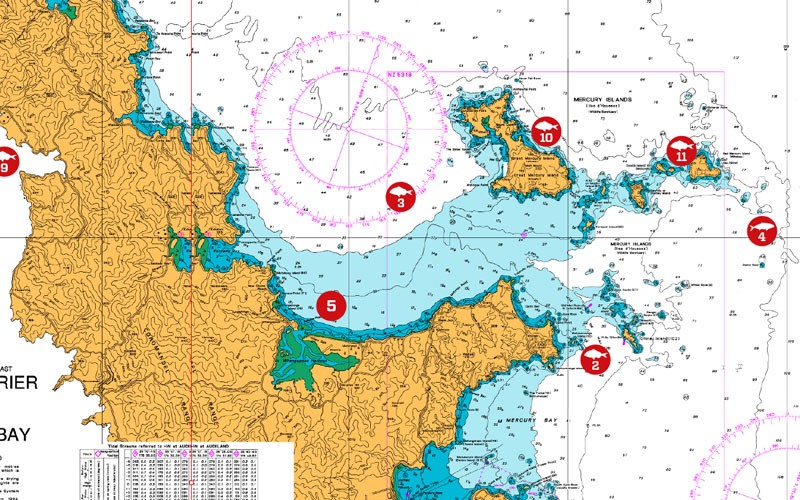 A huge and immensely varied fishing destination the Coromandel attracts fishermen of all types. Rock-hoppers worship its remote northern nooks while blue-water hunters plough the back paddocks of the Aldermans and the Mayor. Kingfish jiggers race from pin to pin through the Mercury Islands while snapper snipers snoop the rocky outcrops connecting its numerous glistening beaches. If any spot has something for all it’s the Coromandel Coast.

A bait and berley spot (in 15-20m) which fishes well at different times of the year. Best when the current runs and youíll need weighted baits to stay in touch with the bottom.

Surrounded by a mix of deep water and shallow reefs, it gets hit by strong current meaning an abundance of baitfish. Either anchor and berley with live baits under balloons or tow livies for kings and cast lures.

Fish it like you'd fish the 30-40m marks in the Hauraki: with softbaits, slowjigs or ledger rigs to pick up snapper over the sand or low foul. Keep an eye on the sounder.

A productive reef rising from 60-70m to 35m. Keep trying with jigs and live baits until they come on the bite and you will be in for some good action.

Paddle a bait out beyond the breakers on the beach and wait for bronze whalers to come across it in the summer months. Can provide great sport.

A great spot to livebait for kings. Plenty of good snapper are taken straylining too. Like much of the top coast, fishes best for kings one or two hours each side of low tide. Take a rope for safety.

Fish off the reef using the current to run the berley back into the reef and draw the fish out. Livebait for kingfish, unweight strayline for snapper.

Lots of foul with small pins right through the area combined with big currents. Slow troll kahawai or livebait under a balloon and bring the jigging gear and topwater gear as well. Reliable area for kings from Spring to Autumn.

There's rocky reef structure that can prove to be absolute dynamite when drifting softbaits. You can get good shelter here in close if an easterly is blowing.

Big baits have been known to produce big fish at this spot.  Target the drop-offs and ledges. Autumn is a great time of the year.

Straylining in 6 - 15m back down the berley trail works well. Look for macs and koheru in the trail and catch them for fresh bait.

Tide isn't the main trick; it's more about feeding times.  Jiggers use PE5 line, a 250g or 300g rod and a selection of 200-250g jigs in different colours. Deep-fished livebait works well too.

13. The G-spot, northeastern side of Aldermen Islands - kingfish

A 50m pin dropping out to around
100m is a favourite jigging spot.

Look for the sharp ridges on this structure. Concentrate the jig shots into the activity showing on the sounder.

Produces magnificent snapper with most methods. Itís also a favourite of freedivers who are chasing the 20+kg kingfish that frequent the area.

Mayor Island is a topic in itself. A favourite of writer Aaron Levien, he suggests starting on the eastern side from 30m, right out to 180m. Try pin hopping until the sign looks good. Fish will show up eventually.

All maps used are created by LINZ / New Zealand Hydrographic Authority and made available by Creative Commons 3.0
Maps should not be used for navigation