Searching for yellowtail gold in the Coromandel 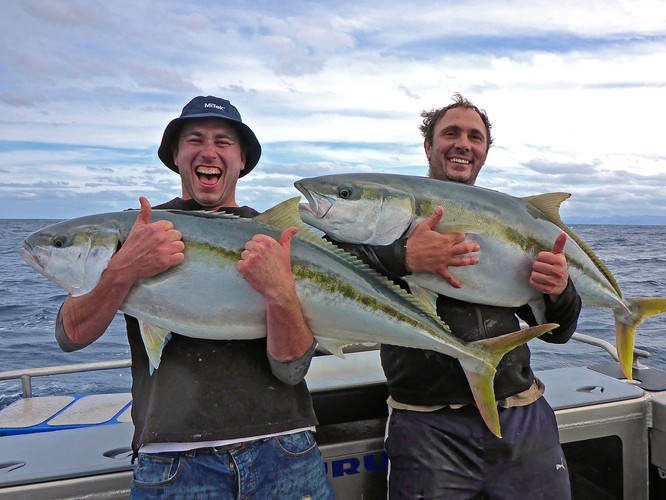 Using Whitanga as a base, Northern Coromandel offers some of the best fishing in the country. Tom Black heads over the Kai Mais to test the waters with charter operation Epic Adventures

here aren’t too many things in this world that will get me up at 3.30AM. One of them is to watch the ABs play a test in the Northern Hemisphere, and the other is to go fishing. It is the latter that has me up this morning. Today’s destination is the beautiful Whitianga, on the Coromandel Peninsula.  While the weather hasn’t been too forgiving recently, today is quite tepid.

I’m heading out with Epic Adventures skipper Hadyn, on an aptly named fishing vessel Epic. This isn’t the first time I’ve fished from Whitianga. As a child, my family would spend every January camping at the Cooks Beach Motor Camp, where we would often head over to Whitianga Wharf, dodge the “sideways” ferry and drop a line in the water.

The vessel for the day

This morning the ferry isn’t running but there is a lone seal frolicking in the early morning light. I’m tagging along with four concreters from Pukekohe; Reece, Tahi, Athil and Brad, who are taking a well-earned day off. They all seem far too cheerful for this hour of the morning and welcome me aboard.

Epic is a sturdy seven and a half metre Senator, with plenty of room for all of us.

The sun is just rising as we head out of the harbour and the bay is millpond calm. Skipper Hadyn brings us to a stop by Motukorure Island.

After a quick search using his brand new Furuno he finds good baitfish sign and tells the boys to drop.

Filling up the livebait tanks

Using just a sliver of squid on sabikis, it isn’t long before the Jack macks start to bite. Not all of us are so lucky though. Brad manages to catch just about everything but livies. The banter begins…

With the livie tanks full Hadyn points the Senator north along the coast past Mercury Bay, the Ohinua Islands, and towards Kennedy Bay. We pass some of the most stunning coastline this beautiful country boasts; not a bad way to start a Friday morning.

We finally come to a halt in a spot that has been producing some decent shallow water kings of late.
The sun starts to burn through some of the low hanging clouds as we get ready for the first drop. Although the water is like glass with great visibility Hadyn warns such perfect conditions may not be perfect for the fishing. With the sun finally warming us all up it’s time to open a few beers.

It’s at this moment that our skipper makes a stark confession; he has in his hands a BANANA protein shake.   “I’m not afraid of superstition,” he states and downs the last few drops. Time will tell…

With plenty of action on the sounder we get the word to drop our lines. Hadyn rigs the livebait through the nostrils and keeps the sinker light.

“Keep your rods low, below 45 degrees, and don’t strike at first bite,” Hadyn tells us. Anglers more familiar with snapper fishing often find this the hardest part of the transition when fishing for kingfish for the first time.

Fishing on the millpond

The fish are definitely there but they don’t want to feed. We give it a few drifts and then decide to head north to another kingi hot spot. This time we are fishing at the mouth of Kennedy Bay. While I’ve spent a lot of time travelling around this part of the Coromandel Peninsula this is my first time seeing it from the sea. It is quite breath-taking.

Fishing the coast hasn’t brought us much luck so Skip makes an executive decision to head deep.

The beauty of fishing in the Coromandel (besides the scenery) is the number of great locations; if one place isn’t working there is always a plan B, or C, D and E and F.

Taking us back south we zoom back past the Mercury Islands and towards the Aldermans. The sea is still nice and calm so I take this opportunity to have a brief nap.

I awake to the sight of deep blue water and the Alderman Islands in close proximity. We aren’t alone out here, as another local boat is out on the same reef. They inform us it’s been slow but they’ve still managed a solitude legal kingi and a nice puka.

Deep water fishing is a little different. Earlier we had been fishing in a little over 15m of water, now we are in closer to 100m. This means we must rely more on Hadyn’s reading of the sounder. He keeps a good eye on the Furuno and is constantly moving us around and setting new drifts. We are fishing mostly between 60-80m.

This is made easier by the colour braid line the Epic gear is rigged with. Once the sign is located on the sounder Hadyn simply shouts the number of colour changes to roll out as we drop. Precision is everything when fishing pins.

We’re using a mixture of overhead and spin set-ups and gear is top of the range, as Hadyn has recently invested in new kit. Finally, the fish are showing interest and it’s not long before we start pulling in a few rats. They might not be keepers but they’re still fun to catch.

While this is all fun for us, these undersize fish often lead to big line tangles and keep Hadyn busy in his secondary role of chief line untangler.

It’s during a quiet period on our fourth drift that Todd pulls up hard. It’s a big fish! Hadyn orders everyone to get their lines up. But before this can even be done Todd’s line goes slack. “It’s snapped you off mate, bloody sharks,” grumbles Skip.

A happy customer from a previous Epic outing

While the shark incident didn’t end well it did reignite everyone’s excitement. The longer we go without a legal fish the heavier the banter between crew and the skipper gets.
“Do you want to hop in and scrape the banana peels of the bottom of the boat now,” Athil digs.  It’s all light-hearted and no one is getting down. Whether there is any correlation between this, the banana and the Lion Red consumption aboard we’ll never know.

Staying deep we try a different spot. A few more rats and a few more tangles later and our luck finally changes. Reece is on! Everyone is quick to pull up their lines. It’s a decent fish.
“Keep your rod low,” Hadyn coaches as Reece powers the fish in. It isn’t too long before we start to see a bluely green colour start to rise from the depths.

This is my first time witnessing a legal kingfish coming to the surface and it’s something special to see. I can’t help but feel a little envious. I want to catch one.

“That’s a nice fish.” Not using a gaff Hadyn hauls the fish in, lifting it from its lower jaw. With it finally in the boat the celebrations begin. It’s high fives all round, before Reece puts on his best photo face. The smile is genuine.

Reece is a happy man

Just like that, the day has turned around and the hours of waiting are quickly forgotten. We give it another hour with mixed results before heading back to Whitianga. While the fishing hasn’t been hot today nobody is complaining.

It’s been a great day out. Hadyn even fillets the fish for the boys. We all pledge to do it again in the summer.