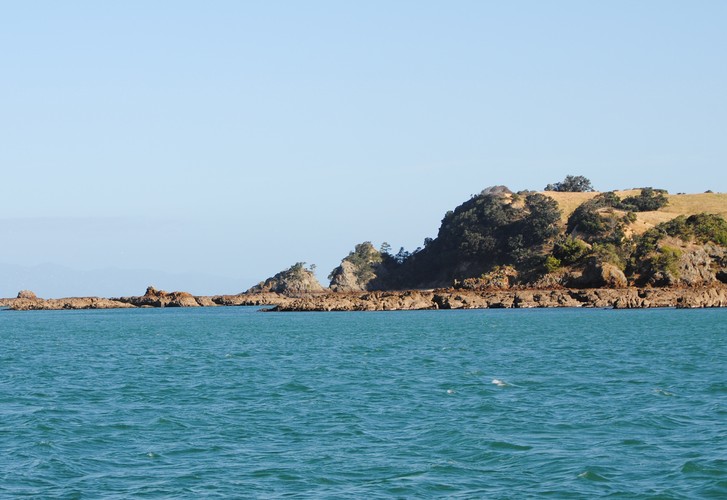 Waiheke's bottom end; home to snapper, kingfish and scallops, is a quick run along either the north or south coast of Waiheke Island (depending on the wind and sea state) from the centre of Auckland. Around an hour to an hour and twenty minutes for the average powerboat.

It’s even less if you launch the boat at Pine Harbour or Kawakawa Bay and for those who don’t make the effort to explore this area, you don’t know what you are missing. With stunningly beautiful bays both on Waiheke and the surrounding islands close by, it is not only a fisherman’s paradise, it is also a great place to take the whole family for a day on the water as the’re plenty of sandy sheltered bays for lunch and a swim.

All maps used are created by LINZ / New Zealand Hydrographic Authority and made available by Creative Commons 3.0 and can be downloaded from http://www.linz.govt.nz/sea/charts
Maps should not be used for navigation

Pakatoa Island is just one such island that has a lot to offer. If the family want to lunch and play ashore on any one of its many pristine sandy beaches, Dad can get his fishing fix close by, often within sight of the family.

Looking at Pakatoa on your chart, the reef that extends out from the shore on the Northern side can not only stray line well for snapper but can also be one of the most prolific kingfish spots in the Hauraki Gulf. To the east of the reef there is a small rise on the bottom and between the rise and the shore is a scallop bed. For those who don’t scuba dive, snorkelling at low tide just off the rocks at the eastern end where the dredges can’t go will often produce a limit bag.

Fat juicy scallops are available around the back of Pakatoa Island if you know where to look.

Slightly to the south, at the eastern most point of Pakatoa there are a number of rocks that extend out from the shore. This is where I target snapper and kingfish when the wind is blowing from the north on an incoming tide.First check this spot at low tide to clearly see where the rocks and gutters are, then once safely anchored drop a wobbley pot of berley half way to the bottom rather than near the bottom as this way it will allow the berley trail to flow over the whole area.

The eastern side of Ruthe Passage has great snapper habitat worth targeting with whole piper.

Cast back a pattern of very lightly weighted baits [with 1/4oz sinkers] at various distances from the boat as well as a live bait under a balloon for a kingfish. When a kingfish takes the live bait don’t even think about setting the hook as it will turn to tears in a nano second by smashing you off in the foul. Up anchor and slowly move the boat out into deeper water letting line out so as not to spook the kingfish, once clear of the rocks slowly wind in line with the rod tip pointing down so not to put any pressure on the fish. This is what we call “walking the dog” and often you can slowly bring the kingfish out within meters of the boat before it wakes up and realises it is hooked. This is one spot where I don’t think I have ever failed to catch a feed of snapper, but because of the rugged terrain be prepared to lose quite a bit of terminal tackle to the weed.

All along the outside (eastern side) of Rotoroa Island the shore line is covered in kelp plus a lot of outlying rocky outcrops. Year round this area holds good numbers of snapper and in summer it holds kingfish as well. Again the area is very foul, so anchor the boat so the stern is lying parallel which then allows the tide to take your berley trail over a vast area. The snapper are well spread out here so set a game plan to fish this spot over a whole tide with lots of berley and ground bait to draw the snapper to the boat.

Given the right conditions my favourite spot of all is at the eastern end of Ruthe Passage where you will see on the chart there is a large exposed reef and a massive area of rocks and foul extending over the north eastern corner of Ponui Island. I have experienced some of the most exciting snapper fishing you can get when fishing with a light northerly wind, on an incoming tide (especially in the late afternoon), just at the change of light using fresh piper for bait cast back towards the rocks and gutters.

The reef running north of Pakatoa Is can yield good snapper and kingfish.

Anchoring just within casting distance of the foul you can rig and cast out whole fresh baits without the need of a sinker as the water is quite shallow in amongst the rocks and gutters here. Once the bait has hit the water there is no need to let anymore line out, but keep the rod tip low and point directly to where the bait has landed. Over time the tide takes the berley and ground bait into the rocks, drawing the snapper out. With the rod kept low you will see when a snapper has picked up the bait and moves off, straightening out the line. A solid strike sets the hook but now it is critical that the rod tip is kept high as this lifts the head of the fish preventing it from dragging you into the foul and busting you off.

Hooks Bay, the most north eastern bay on Waiheke, is yet again just one bay at the bottom end which offers a hell of a lot; from scallop’s and crayfish to kingfish, John dory and snapper. For some reason I have always found fresh bait produces more and larger snapper here. Drag a piper net along the sandy beach or anchor just off the beach with a couple of baited sabki flasher rigs and shake the berley bomb on the surface to bring the bait fish around the stern of the boat.

Hooks Bay, from 12-17m can produce all kinds of species for the strayliner.

Over the years I have found the majority of the snapper here seem to feed on the flat sandy bottom from 12m out to around the 17m mark. Drop the wobbley pot two thirds the way to the bottom so the berley trail gets a wide coverage over the bottom. Use a half meter trace on a running rig or a simple stray line rig. The key to setting the hook in snapper that are soft on the bite is to use a very small sinker and cast the bait as far as you can from the boat. As they are not competing for food when grazing on sand, fresh bait is best.

Snapper are very susceptible to the strayline technique, the bottom end of Waiheke Is offers lots of opportunities for this style of fishing.

For the true straylining enthusiast there is no better spot than the last rocky bay before the headland at the southern end of Hooks Bay where there is a large exposed rock that is surrounded by submerged kelp covered structure. Once the berley trail takes effect, fresh unweighted piper baits cast to the edge of the kelp or between the gutters. Baits that drift down slowly here get nailed by snapper, John dory and kingfish. Upon striking the fish you must play the fish with the rod tip being kept high as the bottom is so rugged, keeping the rod tip high stops the fish busting you off in the rocks.

Truly the bottom end of Waiheke is a very special place. Not many of us can afford a million dollar mansion on the island but we can still enjoy the same stunning scenery, only better, when on the water.