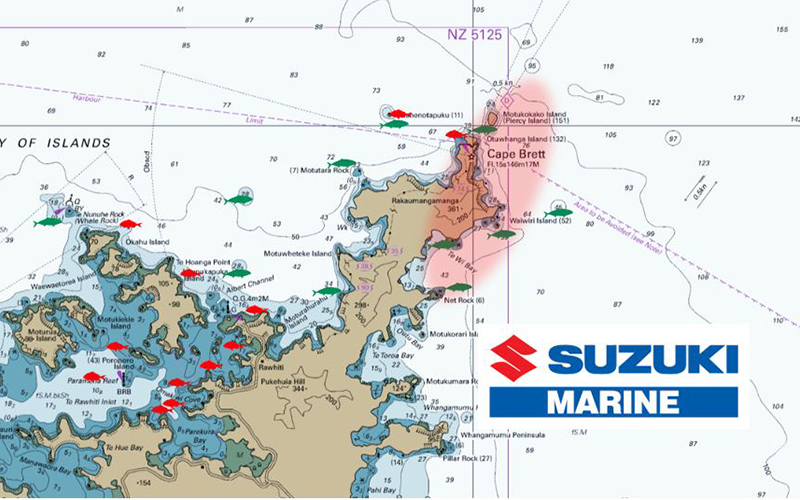 The big summer snapper are on the chew with good numbers coming from all the inner reefs. Live bait and soft bait are doing the real damage and generally you can be confident of some good fishing in 30 metres and less. If using soft baits just flick them ahead of the direction you are drifting and engage the bail arm early as they will smash the lure on its way down as often as not. These artificial lures are certainly easier to deploy than catching and rigging mackerel, but there’s also a good chance of kingfish and john dory when you are fishing livies. As long as the wind and tide are in the same direction, it is not hard to get some good fish as you want to be drifting.

The kingfish are still in good numbers out towards CapeBrett and down towards Waiwiri rock south of the cape.  The .71 metre rock is a bit hit and misscurrently.  One day you can get goodkingis and the next, zero, even though you can see them there.

Then it’s a waiting game for the bite to came on.  The same goes for the snapper if youpersevere you will get a bite.

With boat traffic increasing over the summer months a bitof fishing etiquette is needed with several upset people complaining about thedistance other boats will come and drop their anchor.

Here’s a few pointers to stop you innocently riling upyour fellow fishos JIn general if you are inside the centre foul they will have a stray-line outthe back, so don’t come up the back in their trail.

Instead cruise in quietly from the side and anchorparallel with them.

This week it should be good to hit the shallow stuff allaround the islands.  There are lots offish around.

If you’re looking to stock up on live baits to chaseanything from snapper to marlin, you’ll generally find they are out in 30 metreszone just south of the centre foul. There are big slimeys and jack mackerel that make great baits, so maybeuse a heavier sabiki and a heavy sinker to reduce tangles once they areon.

Remember to avoid touching your baits at all if you canhelp it, just pop the back of a table knife up under the hook and plop theminto the tank.

Snapper charter prices are $135 per person, five hours morning or afternoon kick off.

Kingfish charters start at $285 per person for seven hours.

We look forward to seeing you on board!