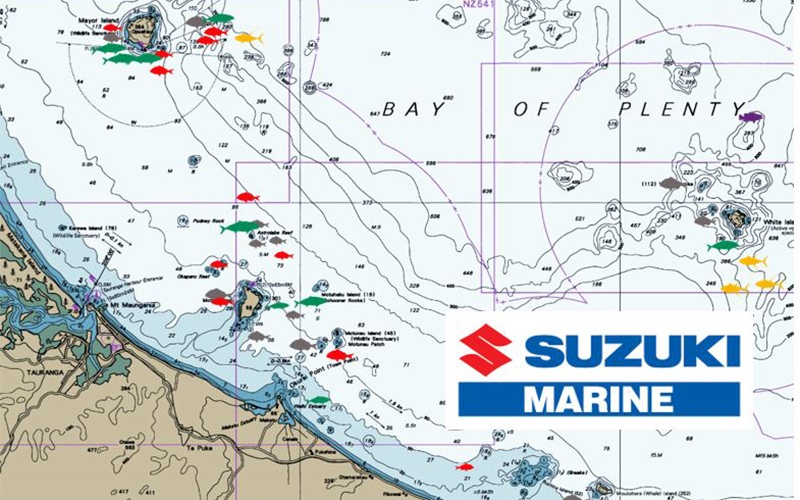 There is plenty of buzz in the Bay of Plenty right about now in regards to the upcoming gamefish season, already there are reports of Marlin being spotted in nice and close to the shore. Other reports getting circulated are of schools of Yellowfin tuna busting up on the surface out from both Mayor and White Island. With Mahi Mahi, short bill spearfish and Yellowfin tuna already being caught in other areas of the country, it surely won’t be too long before the Bay sees some of this action. Here’s hoping for a cracker run of Yellow fin tuna this year.

Snapper are moving into full spawning mode and are nice and fat, carrying incredible condition

They are gathering up in numbers around Mayor,particularly near the drop area where it drops from 20 to 45 metres of water, so if you find them you can have a great session,but a lot of the fish have cleared out of the usual haunts.

Big Kahawai areschooling up around Astrolabe reef in good numbers too, so these could attract bigger predators moving forward.

Kingfish are in really good numbers at Mayor also, and are also building into spawning mode. There are also plenty of kingfish showing up in the harbour now too.

They can become really aggressive at this time and for this reason jigs and stick baits are working really well. Only issue is the big numbers of kingfish have attracted a lot of sharks, some places are proving to be un-fishable at times with big Bronze whaler sharks eating every decent fish hooked.

Only thing you can do when this happens is drive away and hopefully find another patch of fish without the sharks in attendance.

We targeted the trout section of the tournament and the Rotorua lakes were on fire, jigging in 30-40 metres with either pat swift fly rigs or swapping out the flies with pro lure soft plastics doing the damage for us and we even won a couple of nice hams for our efforts.

Our best trout fishing was in lake Rotoiti, with the fish hanging quite deep 30-35 metres of water.

There has been a lot of talk down here lately aboutthe new proposed marine protection zone around Motiti Island.

Recently the court of appeal ruled that regional councils are able to use the RMA to control fishing to protect biodiversity. Inthis case it appears the areas surrounding Astrolabe reef, Schooner rocks,Plate Island and Okaparu could soon be designated as no-take zones for a minimum of 10 years.

See link below for news story.