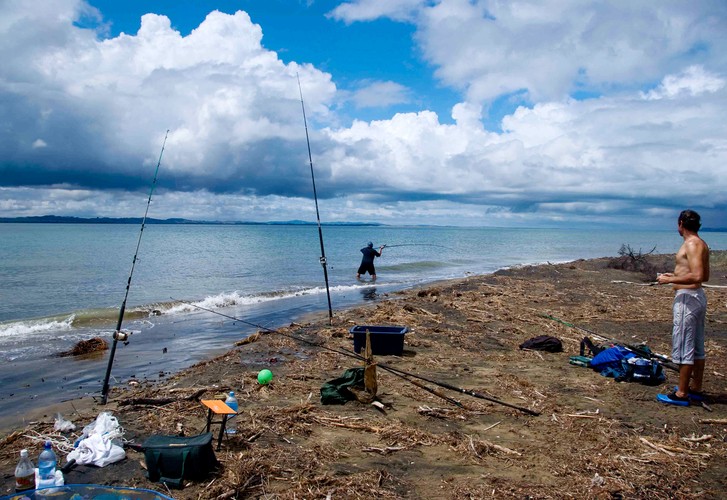 Many anglers neglect the mangrove creeks and channels of our mighty natural harbours in favour of heading out wide but, as Paul Walker explains, there’s a world of possibilities to explore. Estuary and small harbour fishing appeals to many anglers yet it is not a form of the sport that is all that common.

These spots really should be taken advantage of more often. They fit in with how I like to fish. I love fishing with lures from dinghies and I’m quite partial to calm water. Dinghies and the increasingly popular kayaks will get into tight creeks and shallow water with a lot less trouble than a bigger craft. Also, in some areas launching into these waters may be very limited giving smaller craft the edge.

We get locked into fishing the way we always have and the open ocean will always be perceived to hold more fish than some tidal estuary or muddy mangrove creek. That isn’t always the case.

Parengarenga Harbour is just one example of what must be hundreds of possibilities around our huge coastline. It’s just a matter of picking one close to where you live and having a crack at it.

Shelter when you need it

There are fish in these big backwater catchments all year round although summer and early autumn would be the best time as fingerlings and newly hatched fry tend to head for the sanctuary of the mangroves and big snapper follow them in.

This is where the relative shelter of the estuary can give you at least some fishing for the day. Your best times are from about half tide up to full and the first two hours of the outgoing. By using the tide you can drift up to and past the area you had in mind to fish and then drift and fish right back to your launching spot or further on the outgoing.

Study your local chart to pick some likely spots to drift through – you may be surprised just how many options you have. You may have to motor for a while to get up into the quite mangrove areas.

Choosing days with lower tidal flow will keep your boat at a much slower drift rate which will allow you to work over an area more thoroughly and you won’t have to fight the current so much.

If you’re just going to fish an hour either side of the high tide when the flow is slower you could get away with a strong current day, but it’s very easy to get lost in your own world tucked away up in these spots and two hours goes by very quickly. Time is your worst enemy so keep an eye on where you are.

If you anchor your boat just below where the main channel starts to split off into side creeks, you have a great chance of hitting fish. They all have to exit through there.

With the advent of softbaits and all manner of casting lures as well as the high-tech graphite rods matched with some beautiful little casting reels, there’s a whole new world of creek fishing to explore.

You need to consider what snapper will be coming up here to feed on as lots of juvenile fish use these mangroves to hide in so at high tide when snapper can get in there, these little guys will be on the menu. Remember the golden rule - match the hatch when choosing lures. Mud crab and shrimp imitations can be deadly in mangroves but are often forgotten about.

I have never seen a baby flounder lure so I aim to make one out of brown or dark grey silicon and put it on a jighead. It just might be a winner.

Another one to look at would be small Rapala lures and maybe even big worm lures could work. Little poppers are also worth a shot. Lure choice is only limited by imagination so don’t be afraid to give something different a go.

Cast to the back, front and side of the boat and try dropping your lure on the edge of the mangroves and working down into the channel. Try everything you can think of when casting as you have nothing to lose. Enjoy your time in the quite zone - the fish will be a bonus.

Snapper are going to be the number one target in the north but kahawai and kingfish can also move up into these backwaters. For the saltwater fly anglers, both mullet and flounder could be a challenge as I understand both of these fish are partial to a well-presented fly.

The next time you want to go fishing but the wind is howling out to sea, give some thought to getting monstered in mangroves.

On a par with Parengarenga Harbour and also in the Far North, this jewel is full of channels and flats you could easily spend a couple of days poking around happily in. This awesome harbour has boat launching at Rangiputa, which is at the mouth of the harbour. There’s also a ramp at Unahi Road which is right up in the head waters.

A massive volume of water passes through this harbour with each tide and it brings with it good numbers of snapper. During summer, some local fishos never go further than the harbour itself, employing all sorts of different rigs to fish the channels effectively.

The harbour is also a great home for trevally, kingfish and kahawai. The Portland area offers shelter and good fishing.

This popular harbour has several small creeks plus the main channel. Unfortunately weekend boat traffic can get quite busy so the creeks might be a better option.

In the quieter times the main channel is well worth a drift as this harbour is very close to superb fishing grounds around Kawau Island and Whangaparaoa Bay. The harbour doesn’t get over fished so it’s a good bolthole in rough weather and if the fish don’t want to play you can motor up to Warkworth Township Wharf for coffee and a sandwich or maybe a pie and a beer.

This place offers immense scope as it’s so big. There are too many places to cover all along its mainland coast and there are endless nooks and crannies, creeks and channels. You really will need to check your chart and pick a place that’s out of the wind and go fish it and if that one doesn’t fire move on to the next. You will find all the usual suspects in this harbour – snapper, kahawai, trevally, kingfish and even the odd shark.

If Tauranga is huge, this harbour is enormous. It always seems to have good numbers of mixed fish stocks and is probably best fished in late autumn to early spring to miss the summer sharks. The water always looks like milky coffee and you need high tide to get over the banks but there is something special about the mighty Kaipara.