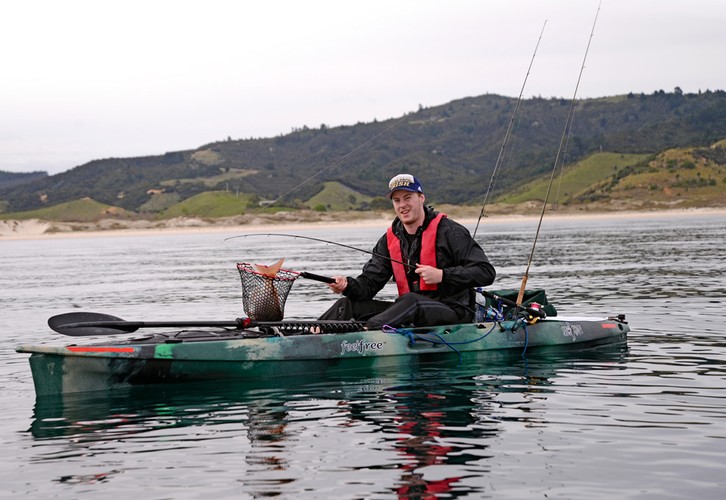 A semi local’s guide to kayak fishing the Coromandel’s Matarangi to Matapoua Bay coastline. Planning a fishing trip in December, the one thing that can be guaranteed is that there are no guarantees. Bite times and weather windows are notoriously unpredictable and good ones usually coincide nicely with the busiest time of year, preparing for the silly season.

Time out of the office

It is the nature of my job at NZ Fishing World that occasionally the planets of work and leisure align perfectly. Such an event presented itself recently in the form of a new Grand Vitara SUV loaned to us to test by the good people at Suzuki.  Adventure was written all over this sporty little wagon, literally.

We reviewed the Grand Vitara a year or so ago, and were impressed by its versatility and ability to tow and launch a small boat with aplomb.  This year’s iteration boasts a free package of factory goodies that add value in both looks and functionality.  A nudge bar and roof racks give the impression that this vehicle has been in the gym in the off season, and an already luxurious interior now benefits from touch screen satellite navigation, Bluetooth and boat friendly reverse camera.

I had been looking for any excuse to throw a couple of kayaks on the roof and head over to the Coromandel.  A quick review of Swellmap.co.nz suggested it would be best to drop everything and catch the next 24 hours before the weather turned horizontal for yet another week.

The author's assessment of this stunning slice of Coromandel coastline offers plenty for kayak-based snapper and kingfish hunters.

The Coromandel offers seriously good fishing from just about any of its coasts and there are a few gems that are in close and can be easily fished from kayaks or small boats without the need to blast past the horizon.

An area I have successfully fished for many years starts at the popular holiday home township of Matarangi and winds around the coastline to stunning Matapoua Bay.  This area consistently serves up good fishing in a variety of conditions but, as with so many coastal locations, the best fishing consistently comes from the same spots. Local knowledge is the key to success.

The Suzuki 4WD allowed us to access the beach from pretty much anywhere.  We chose Kuoatunu, which is generally sheltered, offering easy, dry launching.  There is a nice stretch of water parallel to the steep cliffs of Black Jack Road that can fish well in summer from about 14 metres, on the way to target destination Motuhua Point.

The reef adjacent to this point is popular with commercial crayfish operators and the sandy floor all the way along Otama beach to Kauwera Point is home to some nice scallop beds.

Where there are crays, scallops and commercial boats, there are also snapper.  Boaties without local knowledge often buzz past this area, give it a quick probe, and head off out to sea.  I’ve released some really good snapper, and caught kingies, John dory, trevally, gurnard, even blue cod, all on soft plastics in this area.

Pioneering the compact SUV, Suzuki has continued to develop its offering and always present a sporty, value packed proposition.

Although many boat towing traditionalists would look sideways at the smaller size of the Vitara we have learnt from experience that its 2.4 litre Variable Valve Timing plant and dual ratio permanent 4WD makes for a surprisingly capable combination.

Last year we tested its towing ability by strapping with a 5-metre FC Centre Console to the back and launching it in and out of the boat ramp at Leigh. Anyone that knows that spot will be aware of how tight and steep the location is, as well as just how deep the mud is at low tide. A larger package would both bottom out and get stuck in the mud on the retrieval. No such dramas for the Vitara.

When considering most new modern Japanese vehicles, there are certain expectations that might well be taken for granted. It will naturally drive and handle well, be fuel efficient, offer high safety ratings and be well appointed with extras befitting its comparable price level specification.

What sets certain models apart from the rest is X-factor, and that’s where the Grand Vitara takes a couple of steps forward. To my eye it thumbs its nose at Parnell tractor-like SUVs with its compact nature, but bull terrier like attitude.  Comfortable as an everyday urban hatch, with its slick black leather and charcoal wood look interior, the Vitara offers snappy performance both under the heel and in the handling department.

Without wanting to sound too much like a typically politically correct motoring journo we really did sail over the steep, winding Coromandel ranges with the heavily loaded roof rack not even noticeable in the handling. The Grand Vitara felt tall but cornered like a firm riding hatchback with crisp turn in, smooth progressive braking and not a hint of body roll.

Equally happy on the beach, ski field or school run, the Grand Vitara can clearly wear a collection of hats that make it an incredibly capable adventure-bound all-rounder. The 5 door JLX model that we tested, comes equipped with a collection of exterior and interior treats that we, and our kayaks, became quite attached to.

Suzuki brand this its Adventure package and it is available as added value across the entire Grand Vitara Range. Factory Pro-Rack crossbars are concrete solid and ready to accept a range of aftermarket accessories, including Thule, without a sign of wind noise at any cruising speed.

A grunty nudge bar helps adds looks and longevity to the front end while a reversing camera ensures confidence in tight spots and the ultra important safety aspects of clear views at all levels behind.

Inside, the eye is drawn immediately to a Garmin touch screen satellite navigation screen, which doubles as the Bluetooth enabled entertainment system. Entertaining enough to have the kids arguing about who would sit up front, this system was intuitive and fool proof to operate without referring to a dreaded instruction manual.

Being shallow it often fishes best early in the day, the fish becoming more wary or disappearing altogether after the sun gets up.  If this is the case when you visit drop your fluorocarbon leader down to 10lb and cast your baits and lures well away from the boat. Often, this will be the difference between fresh snapper and battered hoki for dinner that night.

The band of water that seems to produce best results is 15 to 20 metres with a bit of current either side of a high tide.  It’s comfortable to fish in almost any wind, especially offshore southerlies. That said, if a decent easterly is blowing have sausages ready for the barbeque because you’ll likely need them.

Tom and I had picked an absolute stunner day, no noticeable breeze and a high tide at 0900.  The only niggling worry was a moon in full bloom, which is generally not ideal.  The Maori fishing calendar indicated a tough day ahead, but Ken Ring’s bite times promised great fishing.  We went with Ken and a positive attitude, and it ended up paying off.

Paddling out we were not alone as a few fishos’ couldn’t resist the perfect conditions.  Things were pretty slow to start with just the odd pan sized snapper slipping quietly on board, but at least there was something happening.  I noticed a commercial boat joining us very close in and as it came slowly nearer, identified it was dredging the bottom for scallops.  A commercial dredge is a formidable chunk of iron to be hauled across the sea floor and it was not hard to imagine the trail of disturbance it would be leaving below.

Figuring this could be an opportunity to benefit from the free ground bait we paddled out and tucked in behind the industrial sized sand plough.  Sure enough the opportunistic snapper were as predictable as ever and it was all on.

With double strikes the norm a solid haul of nice pan-sized snapper was caught pretty much at will for the following hour or so.  I noticed that we were doing a  lot better drifting around than the success the boats that were anchored up were enjoying. In my experience this is the case more often than not when the weather conditions allow it.